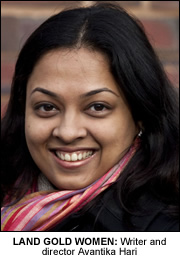 THERE is no honour in killing. A sentiment no doubt that is shared by almost every rationale thinking human being in the world.
For writer and director Avantika Hari the thinking is the same and it was this that led her to ‘Land Gold Women’ – the film world’s first foray into the horrific world of ‘honour killings’.
The UK has seen a phenomenal rise in the number of honour killing victims. Killed for bringing shame onto their family, defenceless victims are often murdered at the hands of a loved one. The Asian Today caught up with Avantikha as ‘Land Gold Women’ premiered in Birmingham last month.
Avantika, what was the motivation behind the film? Why “honour killings”?
I came across an article on an honour killing in a local newspaper when I was doing my MA at the London Film School about 4 years ago. I started to look into the case for several reasons. Firstly the article claimed it was an immigrant problem, specifically an Asian/Muslim one, which I had trouble believing. Having grown up in India and the Middle East, this was the first time I was hearing of an “honour killing”. Secondly I kept asking myself what it would take a father or uncle to condemn a member of their family to death. These questions ended up taking me on a three year journey of writing and research which finally resulted in the script.
How much were you aware of the honour killings before the film came about?
“Honour killing” is a very British term. I came across the term for the first time when I read the article I mentioned above. I had heard of these crimes before but they usually came under “domestic abuse” or “murder”.
How did you come up with the name ‘Land Gold Women’?
It comes from an Urdu phrase “Zan, Zar, Zameen” which loosely translates into “Land Gold Women”. To know more, you’ll have to watch the film!
You shot for four weeks in Birmingham, was there a particular reason for choosing this location?
The film is about how the younger generation challenges the way of the old. I needed a backdrop for this concept and since Birmingham is going through its own transition between old and new, it worked beautifully. The fact the Birmingham is so multicultural and diverse didn’t hurt either!
With ‘honour killings’ I suspect many people have a notion that those who commit these crimes have a mindset deeply rooted in past traditions and customs. But in Land Gold Women, you have the character of Nazir Ali Khan – a well educated man, a University Professor – who in all intent and purpose would be the last person you would expect to see at the centre of an honour killing. How significant is his character in the context of the film’s message?
Incredibly significant. Honour killings occur regardless of socio-economic status, education, caste, creed, country of origin or religion. These crimes are not a blue collar phenomenon. It has to do with how a family is perceived in the wider social context in the area which they inhabit.
What type of research did you undertake for the film?
I read a lot of case studies, press clippings, law books on how honour killings are judged in the UK and conducted interviews of victims. I interviewed fathers and uncles for the film as well. 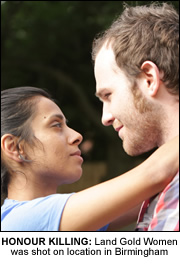 You worked very closely with Ashram Housing Association through out the making of the film. How difficult was it for you personally to hear first hand accounts of women who have escaped honour based crimes?
It was very difficult. These ‘women’ are actually young girls, not older than 16. They have lived several lifetimes in the years they’ve been alive. You can’t really describe their stories without using cliches. They’re so brave! Awareness about their conditions could have averted so much grief and death. Hearing them only served to further my resolve in making the film as true to life as possible.
What was Ashram’s reaction when you approached them about the film?
Relief and excitement. Relief that someone was actually attempting to make a realistic film about an issue they’ve dedicated their lives to and excitement at the kind of awareness that a film of this kind can create about honour based violence. They thought that their care users would benefit greatly and hopefully the public would wake up to the types of things that happen in their own neighbourhoods.
There is a misconception that honour killings are just an Islamic problem. How
does the film attempt to dispel the myth?
I can’t reveal how the film does this, but it does so very strongly. The film drives home the point that Islam in no way condones these killings, nor does any other religion for that matter.
What reaction have you had to the film?
Most people come out of the theatre shocked and very touched. There usually isn’t a dry eye in there. We’ve had people ring us days after they’ve watched it because they can’t seem to forget the film. People everywhere seem to really appreciate the message of the film and the way in which it is communicated.
Are there any plans to release the film outside the UK?
Yes, there are. We hope to release it in Europe, North America and India. Release dates are yet to be finalised.
For more information on Land Gold Women log onto http://www.aricherlens.com