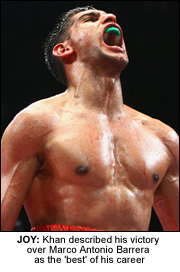 Amir Khan hailed his win over Marco Antonio Barrera at the MEN Arena as the best of his career and now has his sights set on a world title opportunity.

Khan halted Barrera on a cut in the fifth round after an accidental head clash in the opening minute.

But the Mexican struggled to get into the fight constantly hampered by blood running into his left eye from the wound on his hairline.

Promoter Frank Warren said Khan will now take a short break before boxing again, although a June return was mooted.

Khan is now likely to be made mandatory challenger to Juan Manuel Marquez, although will probably have at least two more outings before contemplating a challenge against the Mexican.

However he is now closing in on a world title shot.

“We will see who is around in the next few months,” said Warren.

“There are lots of options for Amir, and we may even take him to the states because Planet Hollywood boss Robert Earl was here tonight and wants Amir to box in Las Vegas.

“When it comes to young fighters in boxing I don’t think there is anyone more exciting than Amir in the world.

“This performance will make people across the pond sit up and take notice.”

Khan, 22, said that he was relieved to win after suffering a first round stoppage at the MEN Arena just seven months ago.

“It was a big fight for me, it was make or break,” said Khan.

“I’m sure I have proved to a lot of people how good I am. I had so much more to give in that fight. I don’t think I got out of second gear.”

Khan also shrugged of suggestions that his win had been diminished by the fact it came via a cuts stoppage.

“If Barrera had stayed in that fight for another two or three rounds he would have got knocked out brutally,” he said.

“He was hurt. I could see it in his eyes. I won every round easily.

“Give me a couple more fights and I will be up there with the best. The loss against Breidis Prescott was a silly mistake I made.

“It just motivated me to go in there and train harder.”

Trainer Freddie Roach, who has been responsible for a much improved Khan, said: “I was holding Amir back in the corner because I knew Barrera was still dangerous, I was telling him to just take his time.

“But I was very pleased with that performance. He did make a couple of mistakes and I will show him the tape when we get back to the gym and show him where he went wrong. But tonight that was his first step towards greatness.”

Financial obligation Control Programs: Choose The Best One for You