Bhangra legends team up with current stars in music fest 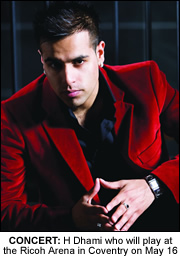 TOP Bhangra stars will descend on Coventry’s Ricoh Arena next month for a star-studded music fest.
Rishi Rich, Juggy D, Mumzy, Veronica, Tasha Tah and DJ Krash will line up at the £113 million venue in conjunction with Rishi Rich Productions for the May 16 concert.
Legendary group Heera will also perform at the venue as part of their comeback tour.
It will be the first time Palvinder Dhami from the group will have performed on the same bill as his son, H-Dhami, in the Midlands on this scale.
H-Dhami won the best act at the UK Asian Music Awards earlier this month while Rishi Rich won the best producer and outstanding achievement categories.
Actor Ameet Chana, who played the role of Adi Ferreira in Eastenders, will host the concert.
Mikala Turner, Special Events Manager at the Ricoh Arena, said the concert was the first of its kind in the city.
“Heera was one of the pioneers of Bhangra music in this country and singer Palvinder Dhami and the rest of the band remain extremely popular,” she said.
“Palvinder is still a legendary figure in the Bhangra world and his son, H-Dhami, is following in his footsteps since he is one of the major figures of the new generation of British Asian singers.
“A number of the artists who are appearing at the Ricoh played at the UK Asian Music Awards at the Royal Festival Hall in London which emphasises their popularity and talent. Previously, fans of Asian music have had to travel to London, Leicester and Birmingham for a concert featuring so many stars of Bhangra music and it is fantastic that Coventry now has a large indoor venue to be able to host such a concert.”