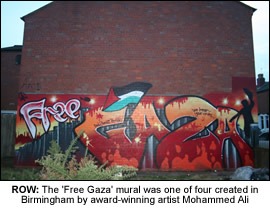 A BIRMINGHAM graffiti artist has accused West Midlands Police of bullying a city resident into removing a pro-Palestinian mural he painted on the side of her house.
Award-winning artist Mohammed Ali, 30, was incensed after the elderly resident at the house in Reginald Road, Alum Rock gave city officials permission to paint over the artwork following a visit from police officers.
He claimed officers had frightened the woman into signing documents allowing the mural to be removed by claiming her house was at risk of being targeted if the art work stayed.
Mr Ali, who won the South Bank Show award last month for his work on community cohesion, painted four murals on private walls across Birmingham during the recent Israeli bomb attacks in Gaza.
Emblazoned with the words ‘Freedom’ and ‘Free Gaza’, the murals have been hailed as a memory to the hundreds of innocent lives killed in the recent bloody 22-day war.
The family at the Reginald Road property claim police officers and community support workers visited their mother about the mural earlier this month.
The elderly woman and her two sons had earlier consented to the mural being painted on their house, while funds for the creation of the mural were raised from the local community.

Son Mohammed Azim told online portal The Stirrer his mother, who speaks little English, was left feeling frightened after the visit.
“They came to her, and started talking about the house being targeted, and how it would be in her best interests to have it removed,” he said.
“What was she supposed to do? She was an old lady, and became very frightened. If they’d asked her to sign over the house she would have done that.”
The mural was removed from the side of the house on 16 February.
Mr Ali said: “I think it is scandalous that the Police should harass the family in this way, and this type of bullying should not be tolerated. All of the other Gaza-themed murals have remained intact, but this wall, they got the magic signature.
“I don’t know why the police may have wiped out the mural, perhaps an effort to minimise any ‘incitement of hatred’ but did they not think that wiping out the mural would do the opposite of their aims? Especially when the mural read nothing of any hatred, or racism, but only words of support for innocent people who die in Gaza.”
He added the mural was painted with the help of local youngsters as a way of channelling their frustrations over the treatment of civilians in Gaza in a positive way.
“With the dialogue I had with them while creating that mural, I explained to them that there are many Jews and even Israelis that are against the attacks on the people of Gaza. I explained that we as human beings are against the killing of anyone, regardless of faith, colour or creed, Mr Ali said. “Yet the police do not understand this. Without any understanding, or consideration of the consequences, in a typical gung-ho fashion they decided, that this bit of ‘graffiti art’, was wrong.”
In a statement to The Asian Today, West Midlands Police said the mural was removed because “graffiti features as one of the local concerns expressed by the Alum Rock community”, and contact with the family was made because of this.
The statement continued: “Following contact with the householder it was established that although they had initially agreed to the design being applied they had since had second thoughts and requested advice and support in the removal of the painting. “With the consent of the owner of the property the graffiti was removed from the premises on 16th February.
“Research clearly shows that Graffiti is an issue which has a detrimental effect on community confidence and within the Alum Rock area graffiti has been identified as a key concern for local residents. In working towards making people feel safer local neighbourhood officers actively work with the community and other partners in responding positively in tackling such issues.”
Related Articles
Graffiti 4 Gaza: Mohammed Ali talks about the inspiration behind his Gaza murals