Teenager who fled Taliban could be deported 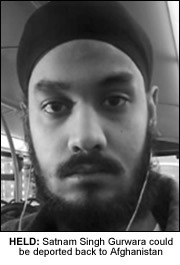 A COLLEGE student who fled to the UK with his family after he was allegedly kidnapped and beaten by the Taliban faces deportation.
16-year-old Satnam Singh Gurwara was arrested at the Dallas Court Home Office Reporting Centre in Salford where he had gone with his father to sign.
He was originally held at a detention centre at Manchester Airport but has now been moved 150 miles away to Campsfield Detention Centre in Oxfordshire.
There are fears the teenager faces the real possibility of being sent back to the very country he fled with his family in 2007.
Campaigners are now urgently petitioning the Home Secretary Jacqui Smith, calling on her to order his immediate release.
They say Satnam, who lived with his family in Afghanistan, was just 12-years-old when he was kidnapped by the Taliban as he made his way to a local Temple with friends.
Before being released two days later, he was badly beaten and had to have 39 stitches in his leg.
Following the incident, Satnam and his family endured constant threats until eventually they sold what they had and fled to the UK in 2007.
Satnam, who is a student at Bolton Community College, lives with his father Rewander (46), mother Peretpal (39), and his sisters, Jasmeen (17) and Simran (12).
RAPAR, the Manchester human rights organisation working with displaced people, is supporting the campaign for Satnam’s immediate release.
He has recently helped set up a YoungRAPAR group to bring together young displaced people so that they can meet and share their experiences.
Ben Hickman, a member of RAPAR’s Leadership Group, has been working with members of YoungRAPAR.   He said: “I beg people to imagine what it would feel like if Satnam was their son, brother or friend. Satnam is our friend. We are outraged that an innocent young person can be detained like this. We are doing all that we can to demand that the Home Office release him immediately and return him to his family. Our thoughts are with him as we cannot be while he is held captive.
“Satnam is a volunteer with YoungRAPAR and gives his time to work with us to provide a space for young people like himself to feel safe and enable them to make a difference to their own lives and the lives of others around them. YoungRAPAR has set up a Facebook group Release Our Friend Satnam! to add our voice to the call for his release.”
For more information log onto the Release Our Friend Satnam Facebook group