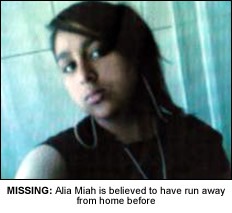 POLICE in Birmingham are concerned for the welfare of a 14-year-old girl who has been missing from home for over a week.

Alia is believed to have gone missing on two occasions before. She is described as Asian, 5ft 2ins tall, medium build, with very long straight black hair.

She was last seen wearing black jeans, black jumper with three quarter length sleeves and black trainers. One trainer had pink lace and the other had yellow lace.

Alia was also wearing a red and white Islamic scarf around her neck and silver necklace with an oval shaped disk.

Police are urging Alia or anyone who knows of her whereabouts to contact officers at Kings Heath police station on 0845 113 5000.