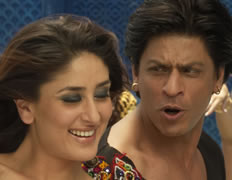 Directed by: Priyadarshan
Cast: Irrfan Khan, Shahrukh Khan, Lara Dutta, Om Puri, Rajpal Yadav, Asrani, Jason Mehta
Billo (Irrfan Khan) is the stubborn village barber who refuses to adapt to new fashions in the hair dressing world.
One day a film crew, including its superstar Sahil Khan, visits Billo’s village to shoot a movie. When the villagers learn that Sahil was Billo’s school friend, they give the barber the respect he craves.
But Billo is also unsure on meeting Sahil. Due to his superstar status he fears the star may not recognise him. After many unsuccessful attempts of getting in touch with Sahil, Billo gives up. He is branded a liar by the villagers and his family.
But all ends well when Sahil is invited to the village school function. He reveals his past to all present about a close friend he had at school who always stood by him in his hour of need.
Whether Sahil manages to meet Billo forms the climax of this comedy drama produced by Shah Rukh Khan.
Billo Barber is a remake of the Malayalam film Kadha Parayumbol and Tamil film, Kuselan. Irrfan Khan plays the lead role, while Shah Rukh Khan only has a minor part.
Directed by Priyadarshan, the film also features Om Puri, Rajpal Yadav and Asrani in supporting roles. Kareena Kapoor and Deepika Padukone are also said to appear in song and dance numbers with Shah Rukh Khan.