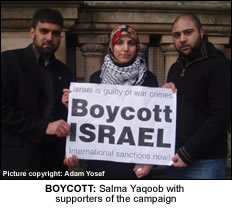 RESPECT MP Salma Yaqoob is leading the way in voicing disapproval over Israel’s treatment of Palestine by launching a campaign urging Birmingham citizens to boycott Israeli products.
In an exclusive piece for The Asian Today Salma talks about the campaign and gives her view on the horror which unfolded in Gaza
“WHEN the history of Palestinian solidarity is finally written, January 2009 will go down as the month when the wheels fell off the Zionist propaganda machine.
It will go down as the month when the brutal, racist reality of Zionist oppression was exposed to the entire world.
And it will go down as the month when Palestinian solidarity was elevated to new heights, in this country and across the world.
Up and down Britain people are demanding a fundamental shift in our government’s relations with Israel. In my own city of Birmingham, in others including Oxford and Preston, councillors are calling for a boycott of Israeli goods and services until Israel adheres to UN resolutions on the Occupied Terrorises.
Up and down the country people are making donations to Gaza relief agencies or collecting food, clothing and medicines for George Galloway’s relief convey to Gaza.
The national sense of outrage at the decision of the BBC to refuse to broadcast the Gaza emergency appeal is reflective of a deeper sympathy for the plight of Palestinians.
In view of the war crimes committed by the Israeli government the response of Gordon Brown is a disgrace. Instead of sanctioning the Israeli government he has instead sent our navy to help do their dirty work in shutting the aid tunnels, vital to the supply of food and medicines.
It is easy to feel despair when we watch the images of young children, murdered and orphaned for no other reason than they are Palestinian.
But even in times of great tragedy and despair, new hope can arise.
For decades, people worked to expose the brutality and injustice of the apartheid system in South Africa. For a long time this was the concern of only a small minority of committed people. But following the massacre of schoolchildren in Sharpeville, and the uprisings in Soweto, the issue suddenly became a touchstone for all those who cared about injustice and oppression.
The events in Gaza may well prove to be a pivotal moment for the movement in solidarity with Palestine, just as the Sharpeville and Soweto massacres were pivotal moment for the antiapartheid movement.
The anti-apartheid movement successfully built, over many years, a campaign to boycott South Africa. Its slogan was “Isolate Apartheid”. It was an all encompassing campaign, including consumer boycotts, targeted campaigns against the worst offenders in terms of corporate support for South Africa (Barclays Bank and Shell), wider campaigns for disinvestment by companies, cultural and sporting boycotts, and campaigns for government to apply international sanctions.
This is the model we should now follow. The anti-apartheid movement successfully made the issue of South Africa an issue for everyone. It was not an’ African’ issue, nor a ‘black’ issue. It spoke to all those who wanted to see an end to the racist regime in South Africa. Likewise, the issue of Palestine is not a “Muslim” issue, and is certainly not an anti-Jewish issue.
I am proud that in Birmingham the Stop the War Coalition, the Palestinian Solidarity Campaign and the Muslim Association of Britain have joined together to set up anew campaign in the city: the Boycott Israeli Apartheid Campaign.
I am proud that our shopkeepers are organising to discuss how they can implement a boycott without undercutting each other.
I am proud that our students, hundreds of whom have taken part in their own organised protests this last month, are now discussing how they can take the boycott issue into their schools.
Our message to the mothers of Gaza is this: your children are our children. We will not rest until they have their natural born right to grow up as equal citizens in their own homeland.”