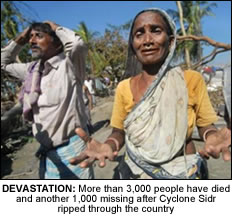 A BIRMINGHAM restaurant has teamed up with national charity Oxfam too help raise funds for the victims of Cyclone Sidr which ripped through Bangladesh.
City eaterie Simla has joined forced with the Oxfam Bangladesh Cyclone Appeal to help raise vital funds to help more than three million victims of the disaster.
Cyclone Sidr ripped through southern and central Bangladesh, destroying millions of homes, bringing down power lines and wiping out vital crops.
The death toll has risen above 3,000 with more than 1,000 still missing.
Dildar Khan, Manager of Simla Restaurant said they would be getting behind the Oxfam appeal ton raise desperately needed funds for the victims.
He said: “We are Bangladeshi, and feel devastated by what’s happened there. The staff here will be doing their bit to help Oxfam, and we’re asking customers to donate as well.”
Heather Blackwell, head of Oxfam in Bangladesh urged the British public to help the victims.
“The scale of this disaster is enormous,” she said.
“Up to three million people are affected. We are seeing families who have lost everything. The British public are incredibly generous and we urgently need their support to help us save and rebuild people’s lives.”
Oxfam has been working with local partners since Cyclone Sidr struck on Thursday, with teams in the worst-hit southern districts of Daerhat, Pirojpur, Barguna and Patuakhali assessing and providing urgent relief such as sanitation and food and water. The money raised will be used to continue to provide immediate relief to over 80,000 people – essential sanitation, food and water, shelter, well and latrine cleaning, and debris clearing, as well as helping people get back on their feet.
One of the world’s poorest countries, Bangladesh has already faced huge damage from severe floods in July.
“People here are resilient,” says Blackwell. “However the scale is such that it will take months for people to be able to return to their normal lives. With an estimated 75 percent of crops in the Southern region destroyed, this disaster will require a long-term relief effort. Oxfam will be here working with our partners in months to come.”
A number of other charities, including Islamic Relief, are also in the area co-ordinating relief aid.