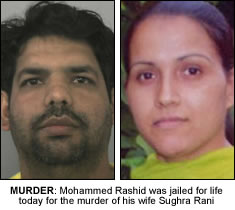 A MAN who admitted stabbing his wife to death was jailed for life today.
Mohammed Rashid, 35, murdered his wife, Sughra Rani, in a frenzied attack”, stabbing her 16 times at the couple’s family home in Mold Crescent, Banbury last September.
Rashid admitted killing his wife after walking into Banbury’s police station and confessing to police officers just hours after the attack.
He was sentenced to life today at Oxford Crown Court with a minimum term of 13 years and 10 months.
At an earlier hearing Banbury Magistrates Court was told Rashid attacked his wife after discovering she was allegedly having an affair.
The couple, who have 2 children, came to Britain 12 years ago following an arranged marriage in Pakistan.
They lived with Rashid’s parents for a time before moving to Mold Crescent.
Det Ch Insp Colin Seaton, who led the investigation, said: “I would like to take this opportunity to offer my condolences to the family throughout this very difficult time.

“This is a tragic death where an innocent victim had her life taken away when she had so much to live for. Nobody deserves to die in such a brutal and callous way and Mr Rashid must now face the consequences of his actions.

“Her family have expressed that Sughra Rani has a wonderful mother and her children miss her greatly.”
Related Articles
Man pleads guilty to murdering wife