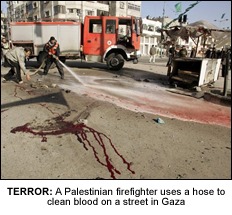 THE Young Muslim Advisory Group (YMAG) has raised concerns in a letter to Prime Minister Gordon Brown about the failure by the Government to condemn Israel’s killing of more than 600 Palestinians in Gaza as an ‘act of state terrorism.’
“By not doing so, we are in grave danger of sending a message to the youth today that the mass murder of civilians can be justified if the right grievances are cited,” said the group in a copy of the letter obtained by The Muslim News.
“In the current political climate there is a real danger that young people who witness the impotence of institutions that are supposed to be protecting innocent life, will turn to other organisations in an effort to make their voices heard and the violence stop,” Brown was also warned.
The YMAG was launched in October last year by the Government and consists of a selected group of 22 young Muslim leaders from different parts of the country. It is aimed to voice the views and opinions of young Muslims in four key areas identified by the Government – on discrimination, increasing employment levels, Preventing Violent Extremism and boosting civic participation.
“As a group, we have defined ‘violent extremism’ as being the indiscriminate killing of innocent people, wherever and by whoever this is perpetrated,” the group said in their letter.
“With over 450 innocent Palestinians killed in Gaza at the hands of the Israeli Government, the British Government must see this as an act of ‘state terrorism’ and as a form ‘violent extremism’, it must be clearly condemned,” the Prime Minister was told.
“Our failure to take clear action also jeopardises our efforts to achieve the objectives of the PREVENT agenda, as we will be seen to be inconsistent and hypocritical in our approach,” he was warned.
YMAG said it looked forward to working with the Government in the future, to help prevent all acts of violent extremism and to create a cohesive and harmonious society both in Britain and across the wider world. It expressed hope that Brown would “take decisive action to assist us in achieving this goal.”