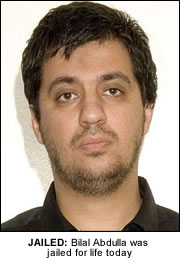 A NHS doctor was today jailed for a minimum of 32 years after being found guilty of planting two car bombs in the heart of London and an attempted suicide attack at Glasgow Airport last year.

Bilal Abdulla, 29, was found guilty of conspiracy to murder and conspiracy to cause explosions of a nature likely to endanger life by a jury at Woolwich Crown Court yesterday.
His co-accused Mohammed Asha was yesterday found not guilty of the same charges.
Sentencing Abdulla to life, Mr Justice Mackay told him: “All of the evidence makes you a very dangerous man, you pose a high risk of serious harm to the British public in your present state of mind.”
The court was told the first attack involved two failed car bombs left in London’s West End on 29 June.
The next day a burning Jeep with gas canisters was driven by Abdulla and another man Kafeel Ahmed into Glasgow Airport. Ahmed died in hospital days after the attack.
Abdulla’s co-accused Mohammed Asha, a neurologist at the University Hospital of North Staffordshire who was cleared of all charges.admitted knowing the bombers but denied any knowledge of the attacks.
During the trial he was praised for his work at the hospital by fellow colleagues.
Deputy Assistant Commissioner John McDowall, head of the Met’s Counter Terrorism Command and Senior National Co-ordinator for Counter Terrorism, described the attacks as “murderous” adding Abdulla “wanted to capture public attention both in the UK and abroad”.
“Bilal Abdulla planned to murder many innocent people when he set out to attack central London,” he said.

“He and Kafeel Ahmed, who died in the attack on Glasgow Airport, wanted to capture public attention, both in the UK and abroad. They would certainly have done this had their murderous plans come to fruition.”