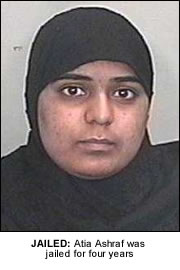 A WOMAN who was caught taking drugs worth more than £18,000 into Leeds Prison has been jailed for four years.

Atia Ashraf, aged 24, of Mount Trinity, Blackburn, was found with heroin, crack cocaine and cannabis when detectives stopped her at the prison in Armley, Leeds in April this year on her way to visit an inmate.
When officers told her she would be searched, she produced a package from her clothing that was found to contain 13.2g of heroin, 6.63g of crack cocaine and 0.562g of cannabis. The value of the drugs – given the higher market value of drugs in prison and the high purity level of the heroin – was estimated at £18,200.

Ashraf was arrested and subsequently charged with possession of the drugs with intent to supply.
She pleaded not guilty, claiming that she had thought the package was a mobile phone, but the jury at Leeds Crown Court did not believe her and she was convicted of the offences.
Ashraf had told the court she was engaged to a prisoner at the jail and had tried to help him.
She said she was to deliver the package to another inmate.
Amanda Johnson, defending Ashraf, said her client was naïve and was “clearly led by others”. 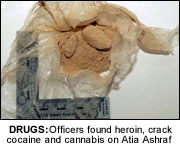 She added: “Without the influence of the prisoner this lady would not have been attempting to take drugs into Armley prison. She is not someone who has been a drain on society or who has mixed in circles of drug dealers.
“She’s someone with no experience of a long-term relationship with a man and perhaps was easily led by him. She felt unable to stand up to him and simply went along with what she was told to do.”

Detective Constable Jamie Hudson, of North West Leeds CID, said: “The sentence that she has received clearly illustrates how seriously the courts will treat people who try to take drugs into prison and it should serve as a warning to others.”