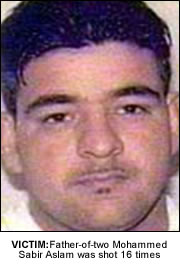 A BIRMINGHAM man who assassinated a father-of-two shooting him 16 times at point blank range with an Uzi sub machine gun has been jailed.
Mohammed Rafiq, 42, was found guilty of shooting dead Mohammed Sabir Aslam on Lozells Road, Handsworth, Birmingham in April 2003.
Mr Aslam, a father-of-two, was shot 16 times at point blank range with a deadly Uzi sub machine gun.
Rafiq, of Colindale Road, Kingstanding, had pleaded not guilty to murder and firearm offences.
But he was convicted by a jury at Birmingham Crown Court and told he will serve 22 years before being considered for parole.
In July 2007 detectives reopened the case into Mr Aslam’s murder and immediately arrested Rafiq after his DNA was found on a cap left at the scene of the murder four years earlier.
When police went to his house they found a stash of weapons including the murder weapon, another Uzi machine gun, a semi-automatic pistol, 88 rounds of 9mm ammunition and a revolver.

Senior Investigating Officer, Glen Moss, described Rafiq as “dangerous and calculating”, adding, “This killing was planned and carried out in a calm and determined way”.


He said the 22 year sentence “shows that we are determined that people who carry guns and commit murder will face a very long time in prison.”