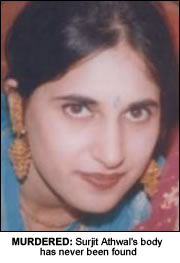 THE daughter of a woman who was murdered in India has demanded her killers be brought to justice.
Twenty-seven-year-old Surjit Athwal died in 1998 during a trip to India.
Last year her husband, Sukhdave Athwal, 43, and mother-in-law, Bachan Athwal, 70, were convicted at the Old Bailey of arranging her murder.
Despite the convictions Surjit’s killers have so-far evaded justice.
But her daughter, 17-year-old student Pavanpreet, has demanded they be brought to justice.
Her family have hired a lawyer to try and persuade the Punjab High Court to order police to re-open the investigation.
In an interview with the BBC, Pavanpreet, who was seven when her mother was murdered, said she wanted “complete justice” for what happened to her mother.
During the trial last year the Old Bailey was told Surjit, a Heathrow Customs Officer, vanished during a trip to India weeks after Bachan told family members she had arranged her daughter-in-laws murder.
The prosecution alleged Surjit was murdered because she wanted to divorce her abusive husband.
The jury were told Bachan made no secret of her disgust with Surjit over her desire to end her marriage.
Michael Worsley QC, prosecuting, told the court Bachan vowed a divorce would only take place “over my dead body”.
A month before Surjit disappeared Bachan called a family meeting where she explained how she would take her daughter-in-law to India under the pretext of a family wedding where she would be killed.
Bachan’s other daughter-in-law, Sarbjit Athwal was at that meeting and told the court her mother-in-law had made it clear she was going to ‘get rid’ of Surjit.
Bachan was jailed for 20 years, while Sukhdave was sentenced to a minimum of 27 years.