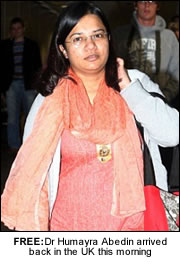 A LONDON doctor who was allegedly held captive by her parents in Bangladesh after refusing a marriage proposal has said she forgives them.
Dr Humayra Abedin landed in the UK this morning bringing an end to an international row over her right to return to the country.
It was alleged she had been held captive by her parents since August for refusing to marry a man chosen by her family.
The High Court in London demanded her release under new rulings to prevent forced marriages.
It was claimed Dr Abedin’s parents fed her sedatives and admitted her to a hospital under false claims she was suffering a psychiatric illness.
Previously they had refused to bring the 32-year-old to Bangladeshi High court on five separate occasions, claiming she was mentally incapacitated.
When she did finally arrive a judge ordered she be released into the custody of the British High Commission and flown back to the UK.
Speaking after her release Dr Abedin said she harboured no ill feelings towards her parents.
She said: “I’m relieved that I’m free, I’m happy. I just want to say thank you to all those who supported and helped me.  I’m fine and I’m feeling happy. I don’t have any bad feelings towards them, they are my parents so I don’t have any bad feelings.”
Justice Syed Mohmed Hossain who authorised Dr Abedin’s release also revealed she had asked the court not to charge her parents over the matter.
Her ordeal came to light after she made contact with a friend in London asking for help.