Hameed Akhtar missing for a month 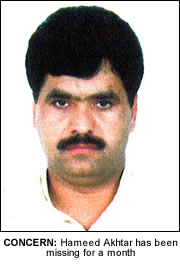 POLICE are concerned for the whereabouts of a 42-year-old man who has been missing from his Wolverhampton home for a month.

Hameed Akhtar was last seen on the afternoon of Thursday 23 October, when he left his home address in Leicester Street for a driving lesson.

Mr Akhtar was then dropped off to visit a mosque in Dunstall, and failed to return home.

Hameed is described as an Asian man, of Pakistani descent. He is of heavy build, around 5ft 8in tall, has short black hair and a moustache. He was last seen wearing a beige suit jacket and trousers, blue tracksuit bottoms underneath his trousers, a white round neck t-shirt, black shoes and a maroon zip-up jacket.
Hameed speaks only a little English.

Anyone with information as to his whereabouts is urged to contact Bilston Street police station on 0845 113 5000.