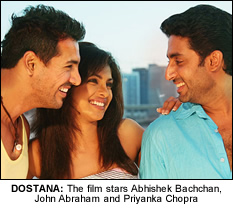 Directed by: Tarun Manshukhani
Cast: Abhishek Bachchan, John Abraham, Priyanka Chopra
Born and bred in London and now in his early thirties, Sameer (Abhishek Bachchan) works in Miami as a male nurse at St. Steve’s Hospital.
Sameer is a goofy kind of guy, who has the ability to charm his way into anybody’s life. He is the man with a plan which he seldom thinks through their consequences.
Kunal (John Abraham) is a guy in his early thirties. Tall, suave, confident and good looking, Kunal has this brooding quality which drives girls totally crazy. And he takes full advantage of that!
He’s a responsible and organised fashion photographer whose life is in order except for his residence permit, as he is an illegal immigrant.
Neha Melwani (Priyanka Chopra) is a 27 year old, contemporary Indian woman. Smart, gorgeous and stylish, Neha works for a fashion magazine called Verve.
Even though she is career minded, Neha longs to settle down and have a family. A highly respectful individual, Neha’s innocence sometimes lands her into trouble. But for now, it’s all happening in the Beach Party Capitol of the world – Miami.
Sameer (Abhishek Bachchan) and Kunal (John Abraham) have recently been turned down for an apartment. This is because the landlady doesn’t want two strapping young men to corrupt her young sexy niece Neha (Priyanka Chopra).
So these boys go onto plan ‘G’ – they pretend to be gay to secure the apartment. All is well till they meet the sexy siren Neha and so begins a journey of fun, frolic and a test of friendship like never before.
When Neha’s boss Abhimanyu (Bobby Deol) enters the scene as the third contender for her affections, life takes a twist for the worse in this romantic comedy.
Tarun Mansukhani makes his directorial debut with Dostana. He has a wealth of cinematic experience having been an assistant for Karan Johar in the past.
The film also features our very own Big Brother winner, Shilpa Shetty. She makes a guest appearance in a song and dance sequence bound to go down well with UK audiences.
Releasing by Yash Raj Films, Dostana is eagerly awaited this November in UK cinemas.