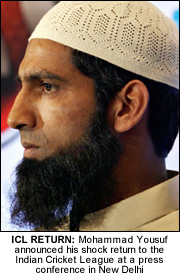 THE PAKISTAN Cricket Board have banned batsman Mohammad Yousuf after he re-joined the rebel Indian Cricket League.
The PCB said they were left with no alternative but to ban Yousuf after he decided to return to India for the start of the second season.
Yousuf’s move ended months of uncertainty over whether he would return to the ICL.
He was convinced into turning his back on the league by the PCB with the promise of a lucrative contract with the Indian Premier League. The ICL had challenged the decision and the matter went to court.
But Yousuf announced his shock decision to return to the ICL at a press conference in New Delhi,
“I have decided to sign for ICL,” Yousuf – who will play for Lahore Badshahs – said in New Delhi. “There was a misunderstanding with the ICL. I was misguided and confused and not able to take a decision earlier.”
He added he was still determined to play for Pakistan despite the PCB’s stance on banning ICL players.
“See, I want to continue playing for Pakistan and the ICL authorities also have no problem with that,” he added.
Yousuf had been included in a 15-man squad for Pakistan’s forthcoming ODI series against the West Indies. He is likely to be replaced.
“Yousuf will remain banned from playing any type of cricket in Pakistan as he has joined the unrecognised Indian Cricket League,” Zakir Khan, PCB’s director of operations, told Cricinfo. “His central contract has also been cancelled.”

Minorities’ job prospects no better than in 1970s

Gurprit Bains Sets the Floor on Fire with Dance Partner

Another Year of Success!