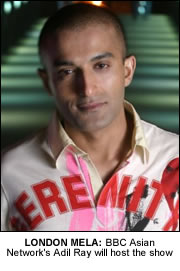 THE BBC Asian Network has teamed up with the London Mela for another year as media partner.
The Mela – the biggest Asian cultural event in Britain – will take place in Gunnersbury Park August 10.
Asian Network will broadcast 7 hours of special programming from the event and have lined up a host of music stars who will take to the broadcaster’s main stage throughout the day.
On-site on the day a BBC Big Screen will show all the main stage performances, while 14 BBC big screens based around the country will feature the highlights of the Mela to an audience across the UK
Raghav, Bhangra artist Jassi Sidhu, Taz and Bollywood vocalist Labh Janjua have all be officially lined-up to appear at the event.
The station said it was “proud” to be the principal media partner for this huge event which last year attracted over 75,000 people.
Asian Network Head of Music Mark Strippel said: “This year sees Asian Network turning up the volume at London Mela, delivering some of the biggest British-Asian and Bollywood music stars and a bigger online and visual platform around our activity. We are proud to be the principal media supporter for the third year running.”