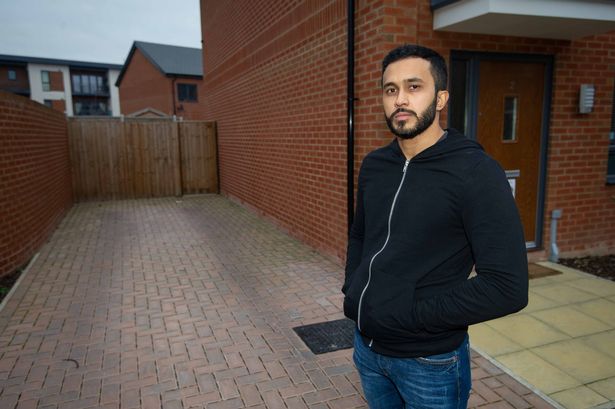 A horrified husband describes the moment he came face-to-face with a masked gang who had broken into his home.

Saleem Deen was out searching for his lost kitten when he returned to find three burglars inside his home in Erdington while his wife was asleep.

The 31-year-old spotted an intruder holding open his garden gate before running inside to see if wife Shabana was unharmed.

Saleem, a sales manager for an IT company, told BirminghamLive : “It was around 2am and I’d been out searching for my kitten, Georgie.

“I shone my torch at my garden gate when I’d got back and, to my horror, there was a male in a balaclava holding the door open.

“My heart dropped. I immediately shouted and screamed and sprinted into the house before locking the front door behind me.

“My first reaction was to check on my wife who was upstairs sleeping.

Saleem Deen was a victim of a knifepoint robbery in his own home.

“I didn’t even check to see if the robbers were downstairs at the time – or if they’d even got in.

“I ran upstairs and spotted them in the garden. I shouted, ‘Get out of here, F off!’ at them from the back bedroom window.

“To my shock and disbelief, one of them turned back around from running away and I heard him say, ‘F this, I’m going to stab this ****.’

“I shone my torch on him and it was pitch black outside and he pulled out this big kitchen knife.

“It was at least 12 inches long and he started to run back towards the house.

“I was in a fit of rage and lost it and ran downstairs to confront them.

“That’s was when I noticed they had already broken into the house through the back door patio and ransacked my cupboards, taking the keys to my BMW.”

Distraught Saleem had his £40,000 blacked-out BMW M4 for a matter of weeks. It was his dream car, he explained.

“I have worked hard and saved for many years to buy a BMW M4,” he added.

“It was my dream car from a young age. The car was worth just under £40,000 under a finance agreement. I had only owned the car for 10 weeks.

“As they reversed off, they beeped the horn as if to say, ‘F you – we have the car!’ and they were away within seconds.

“The police arrived three hours later and took prints and gave us a crime reference number.”

The car key raid took place on Bore Road around 2am on Friday, November 23, with Saleem revealing family life “hasn’t been the same since”.

“I wanted to bring awareness to the terrible spate of car burglaries in Birmingham,” he said.

“It’s terrifying. My wife hasn’t been the same since and still fears coming into the house on her own.

“I urge the people of Birmingham to double up on their house security. It took burglars just seconds to snap the lock on our patio door.”

He is now offering £1,000 rewards for the whereabouts of kitten Georgie and his black BMW M4.

A spokesman for West Midlands Police said: “Offenders have snap-locked the back patio door and have taken keys to a black BMW which was parked on the driveway before making off.

“It’s believed the trio arrived in a white Audi. Enquires are ongoing and anyone with information is urged to call 101 quoting crime reference number 20BE/272658A/18.”