Scottish duo return with a bang 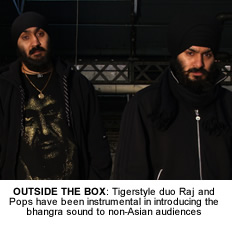 FOR the past ten years Scottish brothers Tigerstyle have pushed the Asian music scene to a new level. Not only do they deserve a huge accolade for revolutionising the Asian music scene with their extraordinary ability to effortlessly merge genres, they’ve single-handedly pushed it to heights we never thought possible. Glastonbury and the BBC Electric Proms have seen the Scottish duo break into predominantly non-Asian areas – with great success. And let’s not forget Britain’s Got Talent – yes it was the brothers’ Asian take on Michael Jackson’s Bille Jean that took Signature all the way to the final!
Back with a new album – we caught up with the duo to find out why it took 6 years for the new album to surface…
Let’s start with the new album – what a fantastic name! How did you come up with that?
The concept for the name came when we had completed the album. There was a resounding theme of pride, passion and spirit within the songs we had complied as the body of work for this album. This one line by Kanwar on ‘Son of a Sardar’ stuck in my mind….”my forefathers were Martyrs & Maharajas”. We’re spiritual guys, and we listen to a lot of religious and spiritual discourse. I remembered this verse I had come across some years ago by Gusai Tulsi Das which says that if a woman is to give birth she should give it to a life which has the spirituality of a Saint, the passion of a Martyr and the courage of a King…….and there you have it “Mystics, Martyrs & Maharajas…..”

The album has been 6 years in the making. Why did it take so long?

The reason this album took 6 years was that we had no infrastructure to release the album after we left our previous label. We were also caught up in a legal wrangling which kept us from releasing music for about two years, so we decided to build things from the underground. We started remixing, and also set up Soldier Sound Recordings for the development of artists like Bikram Singh and Blitzkrieg. Over these years we have developed our skills and really refined our art. We signed with Nachural Records two years ago and they helped us create a vision for this album in the world territory rather than just in the UK. So things have taken time and along the way we have managed to work with some great artists to put together the album.

Tell us a bit about the album – what can we expect?

The album has 17 tracks; each song has at least 1 collaboration if not 2 or 3. We span genres easily with our production so there’s a whole load of Desi and then some flavours of Indian classical, Hip-Hop, Dancehall, Grime, Reggaeton, Dance and Drum n Bass music. We’ve worked with established artists such as Labh Janjua, Lehmber Hussainpuri, and Surinder Shinda, and we’ve also introduced unknown artists like Amrik Babbal, Billa Bakshe and Bill Singh. This album is a bhangra album with an urban streak through it, so you’ll hear collaborations with urban artists like Raghav, Blitzkrieg, Shizzio and Kanwar. It’s definitely a journey through the sound that is Tigerstyle.

A lot of your fans have been waiting for this album for a long time – are you nervous about their reaction?

We are nervous but not about the reaction from the actual public opinion. We’re nervous that the body of work we’ve been protecting and guarding for so long is now coming out into the public arena. We feel like parents when their kid goes to school for the first day! The album itself is something we’re very proud of.

How much does this album differ to your 2002 hit ‘Virsa’?

It’s very different from our previous work. Virsa was a good album for its time but if we listen to it with a critical ear we feel it is unfinished. The songs sound empty to us. It feels like we have so much more to add now with the development of our style and skills. The new album Mystics, Martyrs & Maharajas is very musical, we’ve recorded a lot of live material and there are subtleties to be heard and deeper levels to experience.

There are a lot of big names on the album – Raghav/Gunjan/Lembher Hussainpuri – what qualities do these big names bring to the album?

To be honest we haven’t worked with people due to the fact that they have a big name. Raghav came up to Scotland to write material with us and one of the songs which we completed was ‘Tired of Love’. We performed it with him live at the BBC Electric Proms and the response led to us wanting it to appear on our album. This is just one example. We’ve worked with artists on their merit and creativity on this album not for their name. 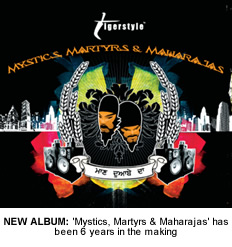 You’ve been in the music business for a while now – do you feel your musical direction has changed?

We feel our direction hasn’t changed it’s just that we’ve travelled further along the path. We have some experience behind us and we have a wide open road ahead. We want to be more and more confident with each release and be able to bring something unique and rich to the scene. We’re also becoming bolder with our approach to compositions and themes, and deeper and more musical with the material.

You’ve never confined yourself to just the ‘Asian music scene’ – how have your experiences at say Glastonbury/BBC Electric Proms and working with the likes of Lilly Allen allowed you to develop your music?

This “out of the box” approach stems from the fact that we’re from Scotland. We’ve always been different and we’re proud of it. So when we get the opportunity to perform in front of a non Desi audience we embrace it confidently. The experience of performing at the BBC Electric Proms and then Glastonbury proved to ourselves that we have something to offer the wider community and that music dissolves any boundaries.

Your Bhangra remix of Michael Jackson’s ‘Billie Jean’ became an instant hit when it was featured on Britain’s Got Talent – how did it feel to have the track played week in week out on national television?

It was amazing! To see so many people with huge big smiles on their faces, standing and clapping to our mix felt good. Our myspace page got crazy amount of hits from that show and we had people messaging us asking for the song and telling us how good they thought it was when they heard it on TV.

We’re seeing more and more British Asian music talent doing the ‘Bollywood thing’. You were involved in a remix for ‘Singh is King’ – how did that come about?

We had been working with Hardkaur for some time and she must have mentioned us to Pritam who was the music director for Singh Is Kinng. He had also heard of us from other sources and was following our music. So one day we had an unexpected call from Bombay and within a day or two we were working on 2 remixes for Singh is Kinng, for Bas ek king, and for Bhoonti ke. After hearing our remixes Pritam decided to involve us in a project he is working on for next year so we were flown to Bombay for a week to work with him, and on return we have continued our working on 2/3 further projects. It’s a completely different ball game working for commercial Bollywood films and so we keep in mind the target audience and the direction of the composer.

We’re seeing a lot of western artists beginning to get a feel for the Asian music scene – (Snoop Dogg ‘Singh is King’, Sean Kingston ‘Bollywood Girls’). What’s your take on this and are you surprised it’s taken so long?

I think it should have happened sooner. But if it’s happening now then we can’t complain. I wasn’t feeling snoop’s collaboration for Singh is Kinng – it didn’t make any sense, but I’m sure there are many big collaborations to come. The Raghav and Redman combo on “My Kinda Girl” is hot!!

We mentioned Sean Kingston there – you’re part of a competition on Desi Hits to produce the best remix of his track ‘Bollywood Girls’ – how did you get involved in this?

The Bollywood Girls remix is just a quick and fun project, its light hearted and good material for our DJ set. Again it’s an opportunity to project Asian music beyond our core scene.

Finally – what’s next on the horizon for Tigerstyle?

We’ll be working harder than ever to promote the new album Mystics, Martyrs & Maharajas and we’ll be continuing to work with new artists to develop good quality creative music.

“Mystics, Martyrs & Maharajas” is available now as a digital download from www.nachural.co.uk. The album will be released on CD on November 3