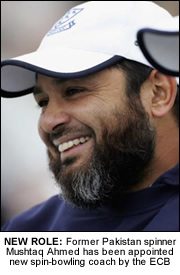 PAKISTAN spinner Mushtaq Ahmed has been appointed spin-bowling coach for England.
The 38-year-old former Pakistan and Sussex leg-spinner will work for the England Cricket Board on a consultancy basis and his role will include working with the spinners in the England Test and one-day squads, the England Performance Programme and Elite Player Development programmes.
Mushtaq, who was part of Bob Woolmer’s coaching set up at the last World Cup, was forced into retirement this year with Sussex following a persistent knee injury.
The spinner spent some time working with England coach Peter Moores who revealed he was keen to get into coaching.
“Mushy is passionate at some stage to coach and pass on the information he’s gained over the last 20 years,” said Moores.
“There are certain people who can be helped to develop a certain clarity of thought. Mushy has that ability.”
David Parsons, the ECB performance director and formerly ECB lead spin bowling coach said: We are very excited that a bowler of Mushtaq’s standing within the game has decided to join our team of specialist coaches based at the National Cricket Performance Centre at Loughborough.
“He will have a role to play at all levels of the game. His primary task will be to mentor our leading spin bowlers in the Test, one-day and performance squads but we also believe he can help encourage youngsters at the grassroots of the game to take up and learn the art of spin-bowling.”
ECB managing director – England cricket Hugh Morris added: “It’s critical that we nurture and develop the next generation of England spin bowlers using the expertise and knowledge of former players such as Mushtaq.
“Spin has been integral to the success of the world’s best cricket teams and we are keen to ensure that there is a constant flow of spin-bowling talent into the England set-up.”

Another Award For Zaf

And is my personal prayer that the enjoy may are plentiful many, with understanding