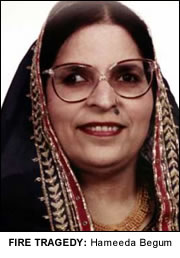 POLICE investigating an arson attack on a Bolton home which claimed the lives of two people have re-bailed two people arrested on suspicion of murder.
A 14-year-old boy and a 22-year-old man have been bailed until Tuesday 2 December 2008 pending further inquiries.

71-year-old Hameeda Begum and her granddaughter Alana Mian, four, died following the fire at their home on Holme Walk in Bolton on 23 June 2008.
A firefighter was also seriously injured as a result of the blaze and remains in hospital in a serious but stable condition.
Yesterday five other people were also arrested on suspicion of witness intimidation.