Six and a half years for Birmingham man 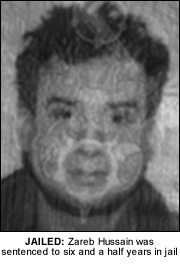 A BIRMINGHAM painter and decorator who tried to smuggle more than £50,000 worth of heroin through Birmingham International Airport in his boxer shorts has been jailed.
Zareb Hussain, 38, was arrested by officers from the UK Agency Border when he arrived at Birmingham International Airport on a flight from Islamabad earlier this year.
Heroin and cannabis were found concealed in the boxer shorts he was wearing while a search of his luggage found a further amount of heroin carefully placed within two DVD players
Hussain, of Barrows Road, Sparkhill, pleaded guilty at Birmingham Crown Court after evidence produced in court proved his fingerprints were on the drugs packages.
He was sentenced to six and a half years in jail.
Hussain was detained at Birmingham International Airport on 21 May as he returned to the city from a trip to Pakistan.
Officers conducted a search of Hussain’s luggage and found two DVD players in his suitcase.
The DVD players were X-rayed. Nestled in the wiring, four packages were identified in the first player and five packages in the second.
A further three grams of heroin and a small quantity of cannabis were found concealed in the boxer shorts Hussain was wearing.
The drugs were valued at £50,000, although this would have doubled or even trebled once ‘cut’ by drug dealers as it hit the UK streets.
John Theobald, Senior Investigation officer for HM Revenue & Customs said: “This latest prosecution will serve as a deterrent to those contemplating this serious form of criminality – you will lose your liberty and spend significant time behind bars.”