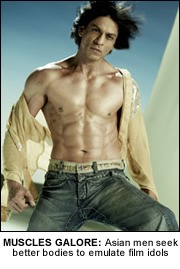 HUNDREDS of young Asian men are adapting their fitness routines in the gym to include body building, as they try to mirror the image of their Bollywood screen idols.
There has also been a huge rise in sales of nutritional supplements as the Asian community seeks to enhance muscular growth, stamina development and recovery after work outs.
That is according to Kunel Patel, owner of Bulksupplementsdirect.co.uk, the UK’s leading online supplier of ‘own brand’ nutritional supplements.
“I think it’s all to do with influences from the Bollywood film industry,” says Patel.
“Young Asian men see mega stars like Salman Khan and Saif Ali Khan doing so well with their image that they want to get the same results.”
The Bollywood industry is a huge source of income for India, and now with Hollywood director Steven Spielberg forging a multi-billion dollar deal with a leading Bollywood studio, the bond between the East and West is getting even closer.
“I think the boys do it for a focus and goal. Many Asian men don’t drink or smoke, so weight training is something they can concentrate on to promote a good clean image,” says Patel.