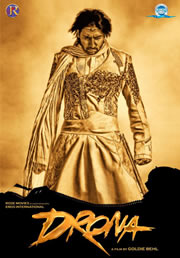 Cast: Abhishek Bachchan, Priyanka Chopra, Jaya Bachchan, Kay Kay Menon
Faraway in a distant town, there was once a young man named Aditya. Brought up by a foster family, Aditya was unaware of his real identity and the destiny that awaits him.
Ever since he was a child, a recurring nightmare haunted him. And when he woke up in fright, there was no one he could ever hold on to except for a magical blue rose petal. This came wafting in the wind, never failing to make him smile through his tears.
Meanwhile, somewhere far from here, an evil sorcerer, Riz Raizada, a descendant of the asuras (legendary demons), had become dangerously impatient in his thirst for the precious secret to take over the universe.
To get to the secret, he has to defeat Drona.

One day, Aditya and Riz come face to face and Riz immediately recognises him as the Drona.
Aditya’s destiny had caught up with him and his life was about to take him on a journey he had never imagined.
Sonia, the leader of the cult, reveals Aditya’s real identity to him. Baffled, Aditya finds it all too hard to believe.
Having no time to lose, Sonia decides to take Aditya back to his place of birth, the ancient kingdom of Pratapgarh. That’s where his mother, Queen Jayati Devi (Jaya Bachchan) resides. She has all the answers to his questions.
But before he could embrace his mother, Riz and his army of the darkest powers catch up with him.
Aditya will now have to rise to the occasion and embrace his destiny. For the sake of mankind he would have to become the legendary warrior he was born to be – Drona.
Thus began Drona’s journey through myths and legends. Along with Sonia, he fights the evil spells of Riz Raizada.
By battling against all odds, he discovers skills that he never knew he had. But would his fears catch up with him?
Would the nightmares from his childhood come in the way of his epic journey?
As good and evil clash in this contemporary fantasy fable, an adventure beckons you into a world of mythic heroes and malicious magicians, of enchanting lands and cunning curses.
Directed by Goldie Behl, Drona introduces yet another superhero onto the Bollywood celluloid. He is none other than Abhishek Bachchan.
Hrithik Roshan was the first actor to play a hero with supernatural powers in the film Krrish.
According to reports, Drona is going to be bigger and better in terms of special effects compared to Rakesh Roshan’s Krrish.
Majority of the film’s shooting took place in Rajasthan and Namibia.
Lead stars of Drona, Abhishek Bachchan and Priyanka Chopra trained very hard for their roles which required them to perform the traditional Sikh martial art called Gatka.
Drona releases in UK cinemas this Eid season by EROS International based in London.