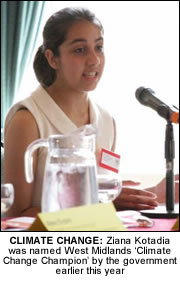 A 14-year-old Asian schoolgirl from Birmingham has redefined the title ‘Miss World’ by becoming an ambassador for global climate change.
Ziana Kotadia, of Selly Park, Birmingham was named West Midlands ‘Climate Change Champion’ by the government earlier this year, after she successfully demonstrated how she would encourage behavioural change and tackle climate change in the region.
She’s now been in the job for six months and during this time has met the Prime Minister Gordon Brown, Minister for Climate Change, Joan Ruddock and has undertaken countless media interviews.
She has spoken before a United Nations panel of ‘green experts’ and has also been on a global warming fact finding mission to the Netherlands, where 60% of the land falls below sea level putting it at risk of severe flooding. The country is leading the way in tackling climate change.
Ziana is a serious young woman with a serious message.
“Climate change is an issue that affects all the inhabitants of the earth, each animal, each plant and each human being. We can continue to act as we are and watch the world sail into unchartered territory, or we can act and change our attitude”, she said.
“It’s those initial small steps that will make a difference. Recycle, recycle, recycle, plastic takes 500 years to break down! Turn off dripping taps – they waste up to 23 litres of water in one home each day and by simply switching to re-usable bags we can help reduce our carbon footprint. It is simply criminal that one third of all the food we buy in the UK goes into landfill sites when so many people in the developing world are starving.”
Ziana is adamant that education is they key and has been taking her ‘how to combat climate change’ tips into junior schools. She added:
“My family and I have learnt such a lot since I started this project. It has made us change how we behave and we see that there is a need to get the recycling messages into the community. Either people simply don’t know what to do to change their behaviour or the message hasn’t got through. That’s why it’s so important to reach children at the junior school level; they can take those recycling messages home. Often they are the ones who are more receptive to change than adults.
“I truly believe that we can reverse some of the damage. Hope and individual action leads to collective change. I am passionate in my beliefs. I have to be as it’s my generation and the future generations that will be the most severely affected if we don’t act now.”