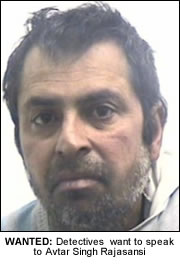 POLICE in Birmingham are appealing for help in tracing a man they would like to speak to in connection with the death of a 54-year-old man earlier this month.
Detectives are keen to trace Avtar Singh Rajasansi, aged 48, as part of the inquiry into the death of 54-year-old Shankar Mukherji.

Mr Mukherji was taken to hospital from an address on Thornhill Road, Handsworth in the early hours of August 11, suffering from serious head injuries.
He died in hospital the following day.

Avtar Rajasansi is described as an Asian man, 5ft 7in tall, of medium build, with black collar length hair and a full beard.
He is untidy in appearance and he was last seen wearing a grey hooded top, khaki coloured jeans and black shoes. He is believed to frequent the Birmingham and Coventry areas.
Mr Rajasansi is also known to go by the name of Avtar Singh Rajss.

Two men, aged 32 and 50, from Hockley and Handsworth respectively have been charged with murder in relation to this matter and are currently awaiting trial.