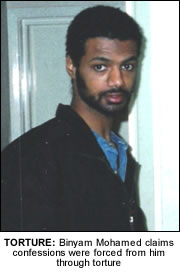 A BRITISH resident held in Guantanamo Bay has won a High Court battle to force the UK government to hand over evidence which he says claims he was tortured.
Ethiopian national Binyam Mohamed, 30, is being held at the American camp and is currently awaiting a US military trial. If found guilty he faces the death penalty.
Mohamed has always maintained his innocence and says confessions were forced from him through torture.
He claims his genitals were repeatedly slashed with a razor blade while being held in Morocco.
Today two judges at London’s High Court backed his case for the government to “disclose in confidence” information to Mohamed’s legal team “which is not only necessary but essential for his defence”.
Clive Stafford Smith, director of the legal action charity Reprieve, who has represented Mohamed since 2005, called it a “momentous decision”.
“Compelling the British government to release information that can prove Mr. Mohamed’s innocence is one obvious step towards making up for the years of torture that he has suffered,” he said in a statement.
“The next step is for the British government to demand an end to the charade against him in Guantanamo Bay, and return him home to Britain.”
Mohamed, who was captured six years ago in Pakistan, is the last remaining Briton at Guantanamo Bay.
He was captured and detained in Pakistan in 2002. Mohamed claims that of the six years he has spent in US custody, more than one year was spent in a torture chamber in Morocco, and another five months in Afghanistan.
His lawyer Richard Stein said: “Today’s judgment reflects the abhorrence of decent society at the methods employed by the United States’ government in the supposed ‘war on terror’.
“We can only hope that the foreign secretary will now reflect on this judgment and provide direct assistance to Binyam’s defence team.”