Boxer gives fans chance to see him in the flesh 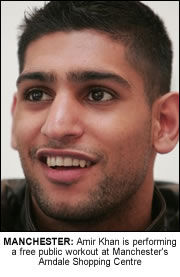 DIE-HARD Amir Khan fans were treated to a once in a lifetime opportunity when the boxer performed a free-to-watch public work-out in Manchester’s Arndale Shopping Centre.
The young star from Bolton gave an estimated 14,000 fans a special sneak preview of how preparations are going for his fifth Commonwealth Lightweight title defence next month at the M.E.N Arena.
Khan has electrified fans up-and-down the country with his dazzling speed and power that has swept him to a perfect 18-0 fight record with 14 knockouts and he is now within touching distance of a big World title fight.
The public work out was the first time fans got to see Khan in action alongside new trainer Jorge Rubio.
The Cuban filled the void left by former trainer Oliver Harrison and is confident Khan will one day become a world champion.
“It’s my ambition to make Amir a world champion,” said Rubio, who was introduced to the media earlier this month during an intense workout at Khan’s gym in Bolton.
“I believe he has got the talent to reign for years. I have been working on his defence and his footwork, but I’m not looking at changing him too much, just improving a few areas.

“It will take time, but Amir has already got better in the few weeks I’ve worked with him, and I’m seeing the difference every day.

“Amir Khan is a smart guy and only I have to tell him something once before he puts into practice. He has all the tools to become a world champion.”
Khan revealed he had met with high-profile trainers during his search before deciding Rubio was the one he wanted.
“Jorge is a great trainer,” said undefeated Commonwealth champion Khan. “I knew as soon as I met him that he was the man for me.

“I’d met Buddy McGirt, Freddie Roach and really liked Floyd Mayweather Snr, but when I hooked up with Jorge I loved his style and his teaching methods.

“I think I’ve been hit more by him that I have been by opponents, because if I leave my hands low he clocks me one with the pads!

“He’s got me moving my head a lot more and slipping shots, and I think I’ve come on a lot just in two weeks.

“He can definitely take me to the next level which is a world title.”

The 21-year-old is next in action at the MEN Arena, Manchester, on September 6.

The Age of Her