Edinburgh Fringe Festival up and running 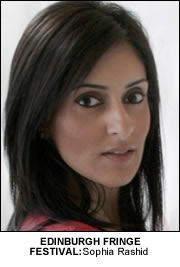 THIS year’s Edinburgh Fringe Festival will host its first ever ‘one woman show’ written by young British Pakistani female Sophia Rashid.
The Manchester based writer has been writing and directing for theatre over the last five years.
Having studied Psychology & Neuroscience at the University of Leicester Sophia returned to the North West to pursue her artistic ambitions and to work with the communities in which she grew up.

Since coming back Sophia has pioneered a number of grass roots arts initiatives in partnership with local organisations including Peshkar, Oldham Theatre Workshop, M6 Theatre and the Contact Theatre.

Along with credits in theatre production she has branched out into Film and TV and is currently working on her first sitcom and feature film script. She has been setting up her own production company over the last year with the aim for it to become a pathway for future artists to break into this industry.

As someone who represents British, Pakistani, Muslim & female communities Sophia doesn’t take it as a light responsibility said: “It is important that there is a counter narrative against the preconceptions and stereotypes about British Asians and Muslims that are portrayed in the media and within our own communities today.”

“I feel it is important for British Asian artists to nurture the next generation who can bring alive our stories and ensure our voices continue to be heard in this world of increasing division. I am delighted to be part of the Edinburgh Fringe Festival and privileged to be the first ever to be part of the new InvAsian Festival at the Fringe.”

This is the first time such a show has been taken to the Edinburgh Fringe Festival and it has been listed in the Times newspaper under “50 Edinburgh events it would be a crime to miss.”