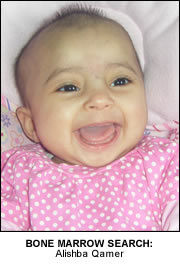 A BIRMINGHAM family and The Anthony Nolan Trust are urgently calling for Birmingham residents to come forward and join the charity’s bone marrow register at a special clinic this week to help save the life of an eight-month-old baby.
Six-month-old Alishba Qamer has been diagnosed with malignant infantile osteopetrosis, a rare disorder of the bone cells which causes overproduction of bone.
Alishba’s aunt, Shaheena Salahuddin, had just completed her studies at the university when her nice first went into hospital. Along with the rest of the family Shaheena has been searching tirelessly for a bone marrow donor match since Alishba was diagnosed with the condition.
“Alishba has the most serious form of this condition and it’s potentially fatal. Quite simply, if she does not get a bone marrow transplant, she will die,” explains Shaheena.
The condition was picked up when Alishba was six months old.
Her parents, Qamer Javed, 27, and Shakeela, 24, had noticed that her eyes ‘danced’ constantly from birth and were concerned, despite reassurances from their doctor and health visitor that this would settle down by the time the baby reached six-months-old.
Then a check-up from the health visitor revealed that Alishba had an enlarged liver. An x-ray at Birmingham Children’s Hospital finally detected the dense bones which led to the diagnosis of the rare and severe congenital condition.
At that point she was given just two months to live, a deadline which has since passed. And although her family know their little girl is a fighter, they also know that the damage being done by the illness is irreversible and every day without a bone marrow donor match is a day more that Alishba is deteriorating.
Alishba has already suffered some damage to her vision and doctor’s fear neurological problems will follow if a donor is not found soon.
“They gave her two months to live – and we’re past that now. She actually had the condition in the womb. But she’s a fighter, even at eight months. She’s such an intelligent happy baby, if I’m singing, she sings along with me and I’ve taught her to clap. She picks up things very quickly,” says Shaheena.
“Alishba’s father is putting on a brave face, but my little sister is absolutely distraught. It’s her first baby and she’s devastated, it’s too much for her. For my niece this is really a matter of life and death,” adds Shaheena.
There are currently 16,000 people worldwide in need of a bone marrow transplant, but because individual genetic makeup is so varied, the chance of finding a suitable donor can be slim – a bone marrow donor whose tissue type matches their own could mean the difference between life and death. Matches are usually found from within the same ethnic community as the patient; but there is a severe shortage of male and female donors aged 18-40 from the Asian community.
“It’s important for us to get across to the South Asian community that for anyone out there aged between 18 and 40, in good health, they might be a match for Alishba. We’re urging them to come forward and sign up to the Anthony Nolan Trust donor register,” explains Shaheena.
“Because Alishba is South Asian, a match is most likely to come from someone from within that community. I understand that there’s a shortage of registered donors from minority ethnic backgrounds so myself, and the rest of the family, really want to encourage as many people as possible to attend the clinic on Wednesday 6 August. Even if you’re not a match for Alishba, you could be a match for someone else. There are so many people out there waiting for bone marrow transplants, signing up to the register is a lifesaving act,” continues Shaheena.
If you would like to help you can attend the Clinic held at the Students’ Union, Birmingham City University, Franchise Street, from 4pm-8pm on Wednesday 6 August
Anyone unable to attend the clinic can register by calling The Anthony Nolan Trust on 020 7284 1234 or visiting www.anthonynolan.org.uk