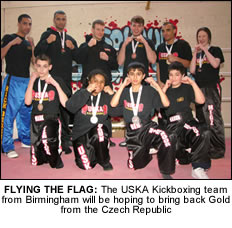 TEN Birmingham kickboxers will fly the flag for Great Britain at the ISKA World Kickboxing championships in the Czech Republic later this month.
The fighters, whose ages range from 10 to 26, are some of the city’s brightest kickboxing talents.
They all hail from the USKA Kickboxing club in the Sparkhill area of the city and earned their places at the world championships after qualifying at a selection tournament in March this year.
Over 100 competitors from all over Great Britain will make the trip to Olomouc in the Czech Republic.
Former World Champion and USKA chief instructor Neil Kelly said his team would be “going for Gold” at the championships.
He said: “I am very confident of the Great Britain team’s chances at the Championships after seeing real improvement in the team over the last five months.
“All have put in 100% in their preparation and will be going for Gold come fight night.”
Qualifying in their respective divisions were Noor Muhammed,10, Zak Rahman,12, Mark Sedgwick,15, Aahdam Amjad,15, Megan Kelly,17, Azad Khan,17, Jake ‘Rattlesnake’ Richards,17, Qasim ‘The Dream’ Nisar,19, Alan Quinn,22, and Peter Quinn, 26.

Spicing Up The Stage

‘I can’t believe this has happened to me’

Religious Hate On The Rise