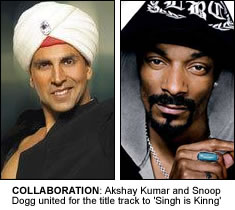 TWO of the most heavyweight names in their respective industries – American hip hop superstar Snoop Dogg and king of Bollywood Akshay Kumar – have come together in a collaboration that heralds the first of its kind for Bollywood.
The duo united on a track for Kumar’s forthcoming blockbuster film Singh is Kinng.
The lavish video for the title track of Singh is Kinng was recorded in Los Angeles earlier this month in time for the 8 August release of the film.
The shoot for the video cost in excess of $1 million – a record for any Bollywood video.
UK based Bhangra outfit, RDB also had a hand in the production.
The project is the first ever collaboration of its kind between a big international music artist and the Bollywood film industry signaling a global turn for the hugely popular Indian film industry.
Speaking about the collaboration, Kumar said: “The song has really turned out very well and I like it very much. It will be fun to shoot the video with a rapper of Snoop Dogg’s calibre. I have seen his videos and he is very impressive.”
A spokesperson for Snoop Dogg added: “Our entire team is thrilled about the video as it will be something new for all of us. It will have Bollywood elements and we have seen a lot of Akshay Kumar’s songs to prepare for it.”
Singh is Kinng is released across the UK on 8 August.