Facility to be used by patients and staff 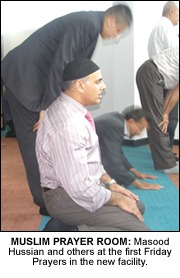 A NEW Muslim prayer room has been opened at Birmingham’s City Hospital.
Trust Chair Sue Davis and Chief Executive John Adler opened the new Wudu and Salat facility last Friday in the Birmingham Treatment Centre link Level 3 and OPD first floor Corridor A.
Ms Davis said the Trust prided itself in its commitment to promoting diversity and the spiritual needs of both staff and the whole community that it serves.
Salat means a prayer prescribed for Muslims to say five times a day. Prior to the Salat it is necessary for Muslims to perform wudu (ablution), to wash the hands, arms, elbows, mouth, nose, face, head, ears, and feet, in a prescribed way. The room consists of two small washrooms for men and women, complete with hand made stools to sit on when performing the wudu.
The room has been carpeted in a way that those praying are facing in the Qibla direction of the Kaaba in Mecca, Saudi Arabia.
Masood Hussain, from the Finance Department, has been working very closely with Paul Scott, from the Capital Projects team, and said: “We are absolutely ecstatic and proud of this facility and would like to thank the Capital Projects team for all their hard work and achievement”.
Members of the local Muslim community were also present at the opening.
Dr Omer Khair, Divisional Director for Medicine A and Emergency Care, said: “They are delighted and appreciate the Trust in providing an exemplary facility like ours which is unique and shows that the Trust does listen and cares about the local community that it serves.
“Thank you also to our colleagues from the Chaplaincy at both sites, but particularly City for hosting the Friday prayers in the chapel and for their continued support and help.”
The new Wudu and Salat room will be open to both staff and visitors. There were over 50 people at the first Friday prayers last week.