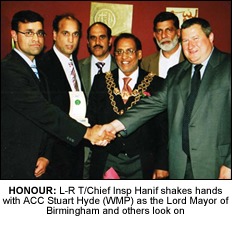 AN officer from West Midlands Police has received a prestigious award for his work with Birmingham’s Pakistani community.
Temporary Chief Inspector Mohammed Hanif was presented with the surprise award at a public meeting by the Pakistani Community Development Network (PCDN) in recognition of his contribution to the city’s Pakistani residents.

The meeting was attended by the Lord Mayor of Birmingham, Councillor Chauhdry Abdul Rashid, Assistant Chief Constable Stuart Hyde, prominent community members, police officials from Pakistan and the UK and business leaders from both countries.

T/Chief Insp Hanif, who has 16 years police service, is currently seconded to the National Association of Muslim Police as its national co-ordinator.

He is involved in community work in his spare time and is a familiar face among many communities, both local and national. As part of his work in Lozells and East Handsworth he developed and nurtured many partnerships between agencies to deliver an excellent and effective service to local people.

He also contributed towards restoring normality during the disorders in Lozells through impressive and wide-ranging community engagement and leadership.

T/Chief Insp Hanif said: “It was a complete shock for me as I was not aware I would receive such an award.

“I am proud and honoured, and at the same time humbled that the community of Birmingham has recognised my contributions, not only as an active community member but also as an employee of West Midlands Police. It’s moments like this you realise communities recognise the work you are doing to make a difference.”

ACC Hyde said: “I would like to add my congratulations to T/Chief Insp Hanif for this excellent piece of work. It is yet another example of West Midlands Police working with local businesses and community members to make a real difference across our diverse neighbourhoods.”