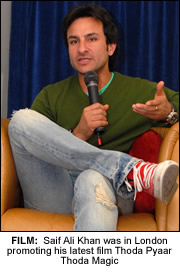 BOLLYWOOD star Saif Ali Khan made a quick visit to London yesterday as he promoted his latest film.
The actor stars in the forthcoming film ‘Thoda Pyaar Thoda Magic’ which is released across the UK at the end of the month.
He was joined by director Kunal Kohli during the visit
Khan, one of Bollywood’s distinguished actors, plays reclusive Indian industrialist Ranbeer in the film who finds himself having to bring up four young orphans. In their unhappiness the young children pray for help which arrives in the form of a bubbly angel disguised as the children’s new nanny, played by actress Rani Mukerji.
Director Kunal Kohli said the film, which has been co-produced by Yash Raj Film, had all the ingredients to become a summer blockbuster.
“It’s a film that conforms to the norms of Hindi commercial cinema but is also very different in its own way, it is fantasy, it is a love story, but it’s also very real and is a complete family entertainer.”
The film, which also stars Rishi Kapoor and Amisha Patel, sees Saif Ali Khan once again pair up with Rani Mukerji after the success of ‘Hum Tum’ and ‘Ta Ra Rum Pum’ to provide audiences with a fantastic family film.
Speaking on the production Saif said:“It’s always great to work with Yash Raj Films and Kunal as they’re family, but what makes this film very special is the fact that it’s not the kind of role I have ever attempted before, so I am looking forward to the reactions (hopefully positive) as I’ve worked very hard on the character.”
Thoda Pyaar Thoda Magic is released across the UK on Friday 27th June.