Home News They must be Batty! 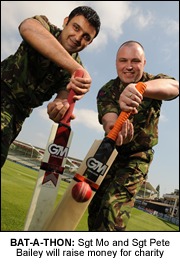 TWO Midland Army recruiters are taking their love of cricket to the next level by attempting a feat like no other.
The cricket crazy duo will take part in a 24 hour ‘bat-a-thon’ testing their skill against ‘the terminator’ of all bowling machines in a bid to raise thousands of pounds for charity.
Sgt Mo, 31, from Lye and Sgt Pete Bailey, 38, from Redditch are both recruiters in the Birmingham Armed Forces Careers Office, and will head down to Edgbaston Cricket Ground on Saturday 17th May, taking it in turns to face balls travelling at up to 90 mph. Playing under test match rules, they will bat solidly for three hours, before having a 20 minute break when they will be able to rest, eat and take an all important loo break!
Their brave bid is all in aid of the Army Benevolent Fund, which provides financial and practical support to soldiers, former soldiers and their families in times of need, and Help for Heroes, an organisation formed to help those who have been wounded in Britain’s current conflicts.
The ‘bat-a-thon’ is the inspiration of Sgt Mo.
“I have always wanted to raise money for charity and these two are especially close to my heart, being a soldier and having friends who have benefited enormously from their help”, he said.
“I have played cricket in the Army for ten years now, so it made perfect sense to raise funds by doing something I love.”
The attempt will test the soldiers’ strength and stamina to the core, putting their Army training to task like never before. So to ensure they are prepared, Sgt Mo and Sgt Bailey have been undertaking a strict training regime, which includes daily visits to the gym, with Sgt Mo taking it one step further and training with his local cricket team, Lye Town Cricket Club working with them in the nets.
Sgt Mo added: “It will definitely be tough. Similar attempts have been made, but what makes this all the more unique and challenging is that it will only be myself and Sgt Bailey taking part and not a larger team. However, I feel confident as we have been training daily to prepare and I’m sure on our Army training will come to good use.”
Sgt Mo has been a keen cricketer for many years and has played for the Army U-25 team, as well as the Adjutant General Corps’ cricket team currently. His active involvement in cricket with the Army has seen him travel the world to the Caribbean, South Africa and most recently to Australia, to play on some of the best pitches in the world.
The ‘bat-a-thon’ will take place at Edgbaston Cricket Centre at the county ground, which is home to the Warwickshire Bears. The British Army recently announced a new partnership with the club, which has seen them become the official partner of the Edgbaston Cricket Centre.