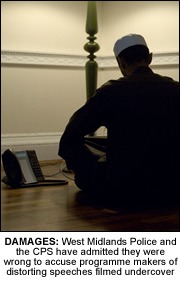 CHANNEL 4 will receive £100,000 in damages and an apology from West Midlands Police and the Crown Prosecution Service after they admitted they were wrong to accuse the broadcaster of faking footage in a programme on Islamic extremism in the Midlands.
The fallout over the Dispatches programme ‘Undercover Mosque’, which was broadcast in January 2007, ended up in the High Court after the broadcaster and programme makers Hardcash Productions sued the police force and CPS for libel.
The Dispatches programme ‘Undercover Mosque’, took 10 months to complete and focussed on two Mosques in Birmingham – the Green Lane Mosque in Small Heath and the Jamia Mosque in Sparkbrook.
Visiting American cleric Abu Usamah was shown telling worshippers at the Green Lane mosque Jews and Christians were “enemies” of Islam and praising Osama Bin Laden.
In a press release sent out shortly after the programme was aired West Midlands Police and the CPS accused programme makers of attempting to stir up racial hatred and misrepresenting the views of Muslim preachers and clerics recorded undercover through careful editing.
But their complaints were rejected by media watchdog Ofcom last November who said they “found no evidence that the broadcaster had misled the audience or that the programme was likely to encourage or incite criminal activity.”
The police force and CPS will offer £100.000 in damages and an apology at the High Court tomorrow.
A statement released by the CPS said: “We now accept that there was no evidence that the broadcaster or programme makers had misled the audience or that the programme was likely to encourage or incite criminal activity.
“A review of the evidence (including untransmitted footage and scripts) by Ofcom demonstrated that the programme had accurately represented the material it had gathered and dealt with the subject matter responsibly and in context.”
Kevin Sutcliffe, deputy head of current affairs at Channel 4, said: “We have been very pleased to get the result.
“We are accused of faking by the police and the CPS, which carries an awful lot of weight.
“We had to take this course of action to show it is not true. We were completely baffled. What were they trying to achieve?
“Why did they go after the programme in such a way? It seems to us a large amount of public money and time spent trying to bring us down.”