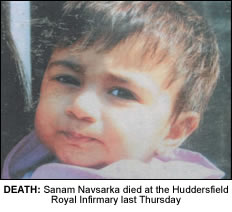 POLICE have named a two-year-old girl who died in hospital after suffering multiple injuries.
Sanam Navsarka died at the Huddersfield Royal Infirmary last Thursday.
Her death was reported to police by staff at Huddersfield Royal Infirmary.
Yesterday Sanam’s mother Zahbeena Navsarka, 21, and her partner Subhan Anwar , also 21, appeared at Huddersfield Magistrates’ Court charged with causing Grievous Bodily Harm with Intent and Neglect in relation to Sanam’s death.
They have both been remanded into custody and will appear before Bradford Crown Court next Monday.
Anyone with information which they believe may be relevant is asked to contact the Homicide and Major Enquiry Team at Dudley Hill via West Yorkshire Police on 0845 6060606.