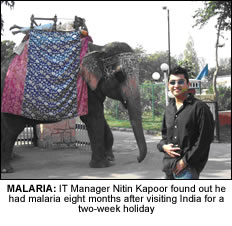 FIVE years ago IT Manager Nitin Kapoor visited India for a short two-week stay to visit friends and family.
Having lived in India for the better part of 14 years Nitin made a point of going back to India at least once a year since he moved to the UK in 1993.
During those trips Nitin had never taken any preventative health measures assuming like many others he was not at risk.
But eight months after his trip five years ago, Nitin nearly died after contracting malaria.
Worryingly his case is not an isolated one.
A new survey released today as part of Malaria Awareness Week found that 50% of people who return to visit friends and family in a malarious country, wrongly believe they have natural immunity to the disease.
Every year, some 2,000 UK travellers return from overseas trips with malaria, making Britain one of the largest importers of the disease amongst all industrialised countries.
On average there are nine annual deaths, with travellers visiting friends and relatives in malarial regions accounting for 60% of these cases.
This week health organisations will offer information to travelers on minimizing the risk of contracting the disease as part of Malaria Awareness Week.
“The common misconception is that if malaria is present in your country of origin, you will have immunity to the disease for life. This is a dangerous myth,” says foreign news correspondent and Malaria Awareness Campaign ambassador, Rageh Omaar.
“The truth is that any natural immunity begins to fade within six months of leaving your home country.
“The fact that people are choosing to take health advice from family and friends rather than that of a qualified doctor or practice nurse may have created a false sense of security that has been passed down through many generations,” he adds.
The survey, commissioned by GlaxoSmithKline, questioned British Indians, Pakistani’s, Bangladeshi’s, African’s and Chinese on their attitudes to Malaria.
Nearly half (43%) of those surveyed did not believe there is a malaria risk in their home country, while 40% admitted to never talking to their doctor about malaria protection before traveling to their home country.
Nitin was guilty of believing the widespread myths about the deadly disease.
Given the fact that he lived in India for such a long time and had never been troubled by mosquitoes, Nitin did not consider taking any preventative measures against malaria. He believed he was immune to the disease and did not think that a short stay in India would put him at risk.
This was not the case.
At the age of 22 he made his annual trip home and arrived back in the UK feeling relaxed after two weeks abroad. However, eight months later he developed what he believed was the onset of flu, accompanied by a high fever. His condition worsened over the next few days at which point he made an appointment with his GP who prescribed medication to bring his fever down and asked him to return if things did not improve.
At this stage Nitin believed he had nothing more than a bad case of flu.
However, his symptoms worsened and two days later he returned to his GP, who decided to carry out a blood test. Fortunately Nitin had the foresight to tell his doctor that he travelled to India regularly to visit friends and relatives which prompted his doctor to check for malaria – even though Nitin’s last visit was eight months ago.
The results returned positive and Nitin was rushed to hospital and treated for malaria immediately.
For the next few days he fell in and out of consciousness and was so weak that he could hardly get out of bed. He doesn’t remember much about his stay in hospital other than being constantly seen to by nurses and doctors.
After the worst symptoms had receded, Nitin was allowed to return home and ordered to rest so that his body could recover. He was out of action for three weeks in total and knows he had a very lucky escape – had his doctor not diagnosed malaria so quickly it could have been a very different story.
The experience has not dissuaded Nitin from travelling back to India to visit his friends and relatives, but he will not set foot on the plane without the appropriate antimalarial medication, insect spray and mosquito netting.
He knows that these simple steps can save his life and allow him to enjoy many more trips to India.
Malaria Awareness Week runs from 12 – 18 May, 2008. To find out if the country you’re visiting has a malaria risk, text 07800 000 571 or visit http://www.malariahotspots.co.uk.