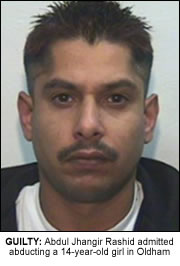 A 34-YEAR-old man has been given an indeterminate sentence after admitting to abducting a 14-year-old girl in Oldham.
Abdul Jhangir Rashid, of Brewerton Road in Oldham, previously pleaded guilty at Minshull Street Crown Court to abduction with the intent to commit a sexual offence.


He was given an indeterminate sentence for public protection, and will serve a minimum of 342 days in prison before he can apply for parole. This was in addition to the 205 days he has already served. He was also placed on the sex offenders’ register for life.

On Saturday 14 October 2007 police officers patrolling in Greenfield in Oldham saw Rashid’s Mazda car parked close to the Dovestones Reservoir with the headlights turned off.

The officers went over to the car and found a 14-year-old girl in the car with Rashid.

He was arrested on suspicion of abduction and was later charged.

Detective Sergeant Jason Byrne from GMP’s Messenger team said: “This man has admitted taking this child with the intention of carrying out a sexual offence.

“The difficulty we have in cases like this is that the children who are targeted may go with the offenders willingly, not recognising the potential risk to their safety.

“It is an offence for an adult to take a child without consent from a parent or guardian and we will pursue a prosecution against anyone who does this.”