Respect MP on growing up as a British Muslim 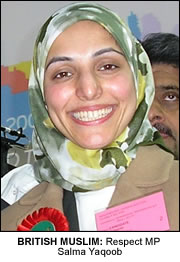 MS Yaqoob, a former psychiatrist, is the MP for the Sparkbrook constituency in Birmingham with the Respect Party – an anti-war movement that was set up soon after war was declared in Iraq. She speaks about her experiences growing up and her encounter with racism, which motivated her to do something to put a stop to it.
Salma only became aware of the many aspects to her religion as she got older.
“Contrary to the stereotype of Muslim girls, my own experience of growing up in a religiously conservative Muslim family was a very happy one. As a child I was not aware of any gender restrictions. As I became older, gender inequalities became more apparent.”
As a girl, she noticed the favouritism towards boys within the family and in her opinion, the wasted education girls achieved.
“Growing up, I remember feeling increasingly uneasy about double standards in the treatment of boys and girls in the families and questioned the faith in whose name such practices were often justified. I noticed that boys were indulged by their mothers, brothers by their sisters. I noticed that while more Muslim girls were progressing in education there was no real expectation that they would act on that education to pursue careers outside the home.
“And I noticed that many of my cousins were being married in circumstances where their ‘choice’ appeared to me to be limited in reality.”
Salma’s experience of racism and introduction to politics began after 9/11. This was something that enraged her and as a Muslim, she felt she could not sit back and let it continue.
“Like countless others whose lives are caught up in the cauldron of the war on terror, my life would never be the same again after the events of 9/11. Women, like me, who wore the hijab and were visibly Muslim, felt very exposed and fearful at the rise in anti-Muslim hostility and Islamaphobia around us as people associated us with terrorism. “Some of my female friends were abused and attacked. I was spat on as I walked with my three-year-old son in a busy Birmingham city centre.”
The anti-war campaigning began to have an effect on Salma, and she soon realized she could help a lot of people if she continued campaigning and receiving support from her growing followers.
“It was only when I started to practically engage in the anti-war movement that I began to feel a sense of empowerment in this new situation. I was not helpless. I could do something to undermine the drive to war and growing racism it entailed.
“I found myself propelled into the leadership of the newly formed Stop the War Coalition in the city and, before long, was busy campaigning locally, nationally and internationally.”
Salma believes the help of fellow Muslims during the anti-war and election campaigning was generally supportive. But she also found herself being questioned by some men who disagreed with her involvement as a woman.
“The impact of Muslim women on the anti-war movement was a subversive one. During my formative years, I had been unaware of any contemporary Muslim women role models for political engagement. While many Muslim men were incredibly supportive, many more deemed it improper that women like myself were occupying the podiums in Mosques and addressing them about how the community should respond to this new and dangerous situation.”
As more women started to attend public meetings, with much persuasion, the stereotypes of Muslim women began to change. Salma convinced many women that they should make their voices and opinions clear for all to hear.
“The ‘Aunties’ (older Muslim women wearing either the hijab or niqab) put their formidable networks and organizational skills to work by fundraising and mobilizing for the demonstrations. Over the years since the anti-war movement came into existence I would estimate that thousands of such women and girls in Birmingham alone have engaged to some degree in anti-war activism. Muslim women participating in these activities invariably took their children with them. From the lessons and examples Muslim girls witnessed from their Mothers, they now started to apply themselves.”
Salma made local history in May 2006 when she became the first hijab-wearing councillor in the city. She believes that this is a great reform for women, particularly Muslim women, in politics.
“It was path breaking for other, less obvious reasons as well. Politics in large parts of South Asian communities is overwhelmingly a male preserve, from candidates to campaigners. This grip is reinforced by the way in which members of tight family and clan networks are encouraged to vote as a block. In this way the male head of the household can often control dozens, and sometimes hundreds, of votes, which are used to exercise political leverage. This ultimately has a quite corrupting influence on politics because the determining factor in exercising such influence becomes less about political conviction and more about which candidate will be indebted to you.”
By Humaira Ashraf