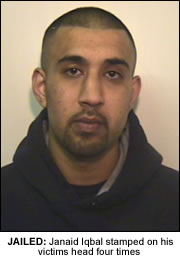 A MAN who viciously attacked another man at a Manchester nightclub has been jailed for four years.
21-year-old Janaid Iqbal stamped on his victims head four times after an altercation at Manchester’s Paparazzi nightclub last April.
The attack left the victim with serious head injuries and a broken jaw.
Iqbal, of Carmoor Road in Chortlon-on-Medlock pleaded guilty at Manchester Crown Court Crown Square to wounding with intent to cause grievous bodily harm.

The victim had been enjoying a night out with friends at Paparazzi at the Printworks when he became involved in a fight with Iqbal at about 2.20am on Saturday 14 April 2007.

A member of the door staff went over to the fight and saw the victim lying face down on the concrete floor. Iqbal stood over the victim and stamped on his head four times before the door staff took hold of him.

Other door staff provided first aid to the victim who was taken to the Manchester Royal Infirmary with a broken jaw and head injuries.

Police arrived at the nightclub and after being told what had happened they arrested and later charged Iqbal.

“It was a sustained attack and Iqbal even continued to stamp on the victim’s head as he lay defenceless on the floor.

“The victim had to have surgery for his broken jaw and has now recovered.”