Home Uncategorised Ajay and Kaol return to the big screen

U Me Aur Hum hits UK screens this week 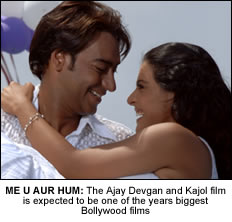 AJAY Devgan and Kajol fans are in for a real treat this April, with the launch of Ajay’s directorial debut U, ME AUR HUM (You, Me and Us) in which Kajol takes the leading role alongside her hubby.
The film, which releases on April 11th is set to be one of the biggest hits of 2008, as Kajol returns to the silver screen after a two-year break. Hot off the success of his intense roles in Omkara and Halla Bol, Devgan has chosen a romantic film to direct and star in alongside Kajol.
Ajay (Ajay Devgan) and Pia (Kajol) journey begins twenty five years ago on a cruise ship. He’s with his friends… she works as a bartender. He believes in love at first sight, she doesn’t. She loves to dance, he takes lessons to impress her. They meet, and over the course of their journey mid-sea, Ajay and Pia embark upon a journey of their own. A journey full of confusion, fun, mystery, mind games and a little romance. Sometimes, as they say, the most exciting journey is covering the distance between two people…but unlike most films this love story takes an emotional twist and they are faced with a hurdle, which seems insurmountable.
Do Ajay and Pia battle against all odds? Or do they simply give up? Will their love emerge victorious? Or is their love story destined to have a bitter end?
U, Me aur Hum is a tale of love, laughter and tears with an unusual and emotional twist that will make audiences think about their own future… and whether love really can conquer the odds that they may encounter on their own journeys.
Ajay says of his directorial debut: “People keep asking me how I decided that this was the right time to direct my own film, To be honest I don’t really know if this is the right time or not, but I know that this is a story I wanted to tell. A story I believe in. And felt strongly about. As they say, one from the heart.”
The script is inspired by Devgan himself and not only does he take his first steps into direction, but it also bring his wife back to the screen adding her inimitable style and magic to the film.
Devgan adds on the theme of the film: “Love at first sight, Happy Marriages, Soulmates. These are all concepts that I believe in. I know they exist. And as a result they are important elements of my film. I hope that audiences across the world enjoy the film, and get some inspirations from it and leave with a renewed faith in life and love.”
U, Me aur Hum also stars Divya Dutta, Sumeet Raghvan, Karan Khanna and Isha Sharvani and is released on 11th April 2008.