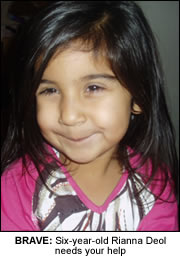 SIX-year-old Rianna Deol should be enjoying her childhood, getting dirty in the garden and generally causing the type of good-natured mayhem millions of little girls her age are accustomed to.
Instead Rianna has only four months to live, a reality facing her and her devastated family after she relapsed just weeks away from completing gruelling chemotherapy in her brave battle against acute lymphoblastic leukemia.
This month her family are making a heart rendering appeal for a bone marrow donor in their battle to save their little girl.
Rianna’s parents, mother Ravi and father Tony, and nine-year-old brother Josh were all unsuccessful matches for a compatible bone marrow, leaving the family distraught.
Rianna’s cousin, Simi Gill, is just one of a handful of family members who are desperately trying to publicise the plight of Rianna, described as “an extremely loving and caring little girl”, in the hope a suitable bone marrow will be found before its too late.
Speaking to The Asian Today, Simi said news of Rianna’s relapse devastated her family.
“Her initial diagnosis in 2005 was traumatic enough but in many ways, the news she had relapsed was even worse”, Simi said.
“With just six weeks to go until completion of her treatment, the news was awful. The situation became even more overwhelming when we found that neither her parents nor her brother were compatible bone marrow donors for her.”
Rianna, a Hannah Montanna and High School Musical fan, was diagnosed with acute lymphoblastic leukemia on Christmas Day 2005.
“Rianna took the news badly, as any 4-year-old child would”, Simi said.
“Having never been admitted to hospital before, it was extremely daunting for her. The whole experience was strange and frightening for her, even now after years of treatment she is still scared of needles. Although she adapted to being in hospital frequently, she still misses being at home with her 9-year-old brother and going to school like a normal child.”
Over the next year Rianna underwent intensive chemotherapy as she bravely battled her illness. Losing her hair was particularly difficult but Rianna, an “extraordinarily brave girl” battled on.
After receiving news of her relapse and of the family’s incompatibility in a bone marrow match, the Deol’s and their extended family are beginning their race against time to save young Rianna.
With the help of The Anthony Nolan trust, the family are actively seeking an unrelated donor.
Currently there are only 12,686 Asian donors registered with The Anthony Nolan Trust – a number which falls incredibly short in comparison to the number of leukemia sufferers searching for compatible donors from the Asian community.
It’s a situation that has become a “real problem”, Simi said, adding an increase in the number of donors from the Asian community would do wonders in helping save the lives of Rianna and countless others.
“Sadly there are very few Asian donors on the register, making it extremely difficult for patients like Rianna to find a match”, Simi said.
“Organisations such as the Anthony Nolan Trust are trying to promote awareness and encourage people to join the register.
“The real problem is a lack of understanding and awareness, until this awful news struck our family we were also unaware of how simple it is to join the register and how much of difference we can make.
“There are many misconceptions about the process. “To join the trust is very simple and involves giving a small 4ml teaspoon blood sample, by joining the register you could be Ria’s perfect match and save her life or the life of another leukemia sufferer waiting for a life saving donor.
“A donor needs to be aged between 18-40 and in general good health. Anyone could match Rianna, we just need more people to join the register in order to give her and others like her the best possible chance
“We just want people to realise that people are suffering needlessly from illnesses like leukemia, we do not need a miracle cure. “We know that in order to help these people, all that is needed is a bone marrow transplant.
“Please take a few minutes out of your day to make a life saving phone call to the Anthony Nolan Trust.”
For Rianna and her family, that call can’t come soon enough.
By Zakia Yousaf
If you would like more information on how to become a donor you can call The Anthony Nolan Trust on 0297 284 1234.
If you’re considering becoming a donor you must be aged 18-40 and in general good health. Log onto http://www.anthonynolan.org.uk  for more information.