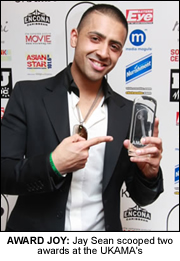 GLITZ, Glamour and plenty of Gyrating was the recipe for this years UK Asian Music Awards which took place at Southbank Centre’s Royal Festival Hall and it went down a treat as the venue played host to the crème de la crème of names in the Asian music scene.
West End Star Preeya Kalidas and B4U Music VJ Salil presented the ceremony and a whole host of celebrity guest presenters such as Grammy nominated Daniel Bedingfield, Juggy D, director Gurinder Chadha and UK RnB group Fundamental 03 set the stage alight.
To add to the fire audiences were treated to performances by North American hip hop artist Blitzkrieg, Roachkilla with Surinder Rattan, D Boy featuring Swiss and V Dubl E, Dutch singer Imran Khan, RnB sensation Jay Sean, Singer – songwriter Karen David, Punjabi singer Lehmber Hussainpuri, Punjabi Hit Squad featuring Alyssia, the Shaanti Collective with The Kalyan and Sona Family.
To close the show a spectacular exclusive performance by Tickbaby and Rishi Rich with Veronica, Mumzy and H Dhami took place which was the icing on the cake to the magnificent ceremony.
The whole event was a real star studded event which the audience members dually noted and have already cleared their diaries for next years Awards night.
Jon Hale, of Nashi Media Group who were the figures who breathed new life into the Awards ceremony to help reflect the growing importance of the Asian Music scene
Said: “Tonight does make a major watershed in the development of Asian Music. UK musicians are now seen as amongst the most creative and influential – and we will give them all the support in the World to help make it happen for them.”
If you were not able to catch the event live, B4U the official presenting partner for the UK Asian Music Awards will be screening the event on the 23rd March. This will give you a chance to fill up on a huge dose of music, exclusive celebrity interviews, and behind the scene action, so keep your eyes peeled. Bala Iyer, head of Business B4U Network Europe said: “We believe that B4U Music plays a pivotal role in the Asian Music Industry worldwide, therefore we were pleased to be involved with this event that promotes and celebrates the talent in the UK and abroad.”
Amid the winners was Shin lead vocalist from DCS arguably one of the biggest Bhangra Bands worldwide who picked up the Outstanding Achievement to a standing ovation that was truly deserved.
All the winners of the night were:
Best Act: Sukshinder Shinda
Best Album: Sukshinder Shinda – Living the Dream
Best Club DJ: Jags Climax
Best Female Act: Hardkaur
Best Newcomer: H Dhami
Best Producer: Swami
Best Radio Show: Adil Ray – BBC Asian Network
Best Urban Act: Jay Sean
Best International Act: Adnan Sami
Best Video: Jay Sean – Ride It
Best Website: Desi Hits
Commitment to the Scene: Nitin Sawhney
Outstanding Achievement: Shin from DCS
Lifetime Achievement: Heera
By Sunny Sahota
Related Links
The UK Asian Music Awards – Picture Gallery