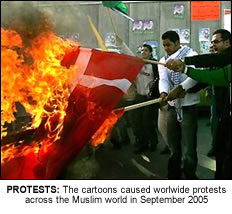 A NUMBER of Danish newspapers have reprinted cartoons of the Prophet Muhammad which caused Muslim outrage over two years ago.
The caricatures, which spurred deadly protests in the Muslim world in 2005, were reprinted just hours after the police intelligence agency, PET revealed they had foiled a plot to assassinate Danish cartoonist Kurt Westergaard whose drawings sparked outrage.
Two Tunisians and a Dane of Moroccan origin were detained yesterday after the assassination plot came to light, officials have said.
The Jyllands-Posten newspaper, which first published 12 depictions of the Prophet Muhammad on Sept. 30, 2005, reprinted Kurt Westergaard’s cartoon in its Wednesday edition.
Several other major dailies also reprinted the drawing, which shows Muhammad wearing a turban shaped like a bomb with a lit fuse.
“We are doing this to document what is at stake in this case, and to unambiguously back and support the freedom of speech that we as a newspaper will always defend,” said the Copenhagen-based Berlingske Tidende.
The cartoon by Westergaard and 11 others sparked deadly protests across the Muslim world when they were published two years ago in a range of Western newspapers.