Home Features Why we must ban forced marriages 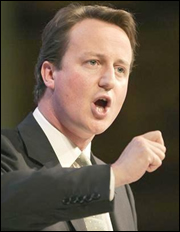 IN a speech in Bradford Tory Leader David Cameron said his party would consider making forced marriages a criminal offence. Here’s what he had to say.
“A FEW months ago, in a speech about rape I announced how the Conservatives are going to review sentencing, give greater stability to rape crisis centres and make sure teaching consent to sex is in the sex education curriculum.
In the same speech, I also said when we come into government, I want the Conservative Party to have an integrated strategy to tackle all violence against women. Today, I want to write about the next stage – tackling forced marriages.
Let me make clear, this has nothing to do with arranged marriages. These involve children putting their trust in parents to find them a partner – in many cases these marriages are long, successful and happy.
Forced marriages, on the other hand, are the practice where girls – some as young as eleven – are bullied, psychologically pressured, assaulted, sometimes kidnapped and taken abroad, and forced to marry someone they don’t want to. It seems utterly bizarre, and frankly unacceptable, that this goes on in Britain – but it does.
So, what are facts? Well, understandably, they’re pretty sketchy. What we do know is that some 300 cases of forced marriages are reported to the Forced Marriage Unit every year. Most involve schoolgirls – and let’s not forget the fifteen percent who are boys. But these 300 cases are really just the tip of the iceberg. Many more cases come to the attention of the police, social services, health, education and voluntary services. And many, many more go unreported. The truth is the figure is more likely to be well into the thousands rather than hundreds.
So what are we going to do to stop them? Well, first up, we need a law enforcement response. An important part of that is recognising the powers we already have. Nearly all the methods used to force women into marriage and keep them in it – intimidation, assault, rape, kidnap and murder – are already crimes in themselves. We should be enforcing our laws to stop it from happening and making sure the people behind them are arrested and where necessary locked up. This won’t happen unless our police are genuine crime-fighters instead of form-fillers. That’s why police reform is so vital – and that’s why I’ve placed such high importance on it.
But it’s not just about the powers we’ve already got. We will need some new ones too. One could well be making forced marriage a specific criminal offence. At the moment, the Forced Marriages Act, which we supported, only makes it possible to pursue civil prosecutions. The argument runs that it is unlikely that victims will come forward if it means pressing criminal charges against their parents. But we shouldn’t close this door – and if the current legislation doesn’t work in ending forced marriages, the Conservative Party would consider making them a criminal offence.
Where we definitely will act is around the actual marriage phase. The key is to make sure that both parties have agreed to a marriage – and that they are old enough to have made that decision.
A Conservative Government will increase the minimum age for any spouse coming to Britain, and their British partner, to 21. What’s more, there will be separate, private interviews for both groom and bride. And everyone who comes to live here must have a basic level of English – that way, they’ll be better able to integrate into British society and more aware of their rights.
We’ve also got to stop the practice where British citizens are bundled onto planes, flown abroad and forced to marry someone. That’s why the Conservatives will make sure that if you want to go and marry abroad, you must register beforehand – with the name of who you intend to marry, where and a deadline by which the marriage must be done. If you don’t meet the deadline, the marriage won’t be recognised for immigration purposes.”